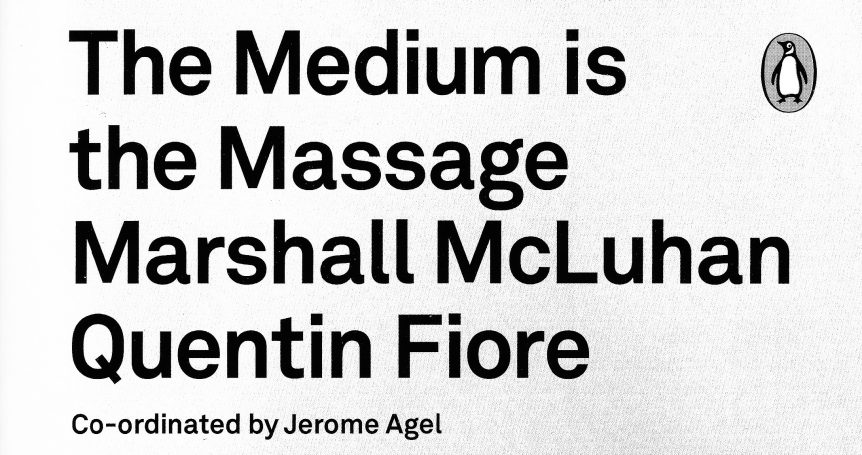 Writing on Digital prompted me to re-read McLuhan. I admit that I have not read it since the 60s, and my original copy was lost. So, thank you, Amazon!

The Medium is the Message is still a brilliant, farsighted book. Let’s consider the time that the book was written. Post Industrial, Pre Digital. Television was conquering the world, space technology was allowing TV signals to be seen worldwide (All You Need Is Love, anyone?), the Vietnam War was being fought as much on TV as on the battlefield, and student revolutions were everywhere.

I want to pick up three points, and raise one question.

First, McLuhan’s contention was that humanity started in an auditory state – awash with sound, coming at us from all directions. As McLuhan notes, we are not equipped with earls! Writing, and more especially the printing press, pushed us into some kind of ‘linear’, focused state. Vision took over from hearing, and the Renaissance notion of perspective meant that we needed to focus on direction. Whilst talking was our main medium of communication, we had to remember things if we were to debate and progress.  The oral tradition had been lost, and McLuhan suggested that the solitary acts of writing and reading had affected tribal unity and imagination. We abrogated the job of memory to a third party, books (and later, computers).

McLuhan argued that, with electric media, we are surrounded by (moving) pictures just as we were surrounded by sound. Had he known about the Web, he could have said that with even more force. The difference remains, though, that

‘Where a visual space is an organized continuum of a uniform connected kind, the ear world is a world of simultaneous relationships‘. (pg 111)

Note his use of the word ‘connected’.

Second, every medium that carries messages to us also impacts the way we receive the message. The technology bears down on us, changing our perception of the message we are receiving. The way we consume the medium impacts us, too. Watching TV with friends changes how we view the program. And television was participatory, unlike reading a book.

I love this quote:

‘The family circle has widened, the worldpool (sic) of information fathered by electric media – movies, Telstar, flight – far surpasses any possible influence Mom and Dad now bring to bear. Character no longer is shaped by only two, earnest, fumbling experts. Now all the world’s a sage (sic)‘. (pg 14)

Third, electric media was changing our world. It was bringing together our separate, traditional and geographically tied groups. Television was mass, and it was creating the Global Village. Again, the Web would just strengthen his line of reasoning.

If the medium is the message, and the medium we are considering is Instagram, how should we think about it?

It is not just the images to be considered – but also the way they are presented, the social context and the social pressure – the passive and ethical active. Instagram fosters a culture of likes, and the impact of its algorithms on what we see is extreme. We cannot just ‘look’ at an image – either as artist, consumer or curator – we respond to it. Hashtags have their own ontologies. Whilst not as ubiquitous as ‘to Google’, Instagram has become a verb. It is a communication system and a launch pad into commerce and the web as a whole.

We must consider the system in which the image is presented if we are to come to terms with it – and use it to meet our needs. I need to ponder what that means for my strategy of engagement with Instagram.