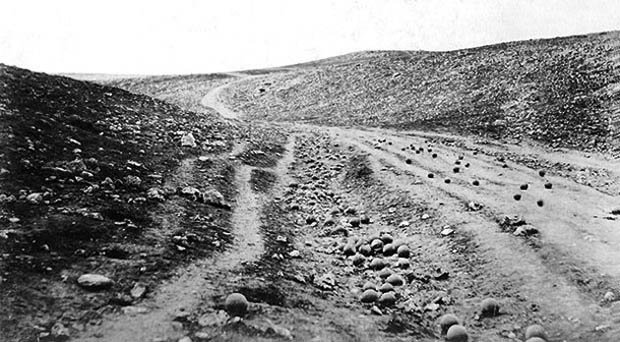 Which came first, the chicken or the egg?

When Roger Fenton took the first war photographs during the Crimean War (1853-1856), did he fake the most famous image, In The Valley of The Shadow of Death?

There are two images existing – one with cannonballs, and one without. Which came first?

‘Roger Fenton was sent to record the Crimean War by Thomas Agnew of Agnew & Sons, where the United Kingdom, the Second French Empire, the Kingdom of Sardinia, and the Ottoman Empire were fighting a war against the Russian Empire. The place of the picture was named by British soldiers The Valley of Death for being under constant shelling there. When in September 1855 Thomas Agnew put the picture on show, as one of a series of eleven collectively titled Panorama of the Plateau of Sebastopol in Eleven Parts in a London exhibition, he took the troops’—and Tennyson’s—epithet, expanded it as Valley of the Shadow of Death with its deliberate evocation of Psalm 23.

In 2007 film-maker Errol Morris went to Sevastopol to identify the site of this “first iconic photograph of war”. A second version of the photograph without cannonballs on the road led him to question the authenticity of the picture. Hitherto opinions differed concerning which one was taken first but Morris spotted evidence that the photo without the cannonballs was taken first. He remains uncertain about why balls were moved onto the road in the second picture—perhaps, he notes, Fenton probably deliberately placed them there to enhance the image. However, according to the Orsay Museum, “this is unlikely as the fighting raging around him would probably not have allowed him to do so”. The alternative is that soldiers were gathering up cannonballs for reuse and they threw down balls higher up the hill onto the road and ditch for collection later’.

Vox Darkroom explores the issue in a neat documentary film.