The work of Broomberg & Chanarin has often featured in my critical reviews, alongside that of Sophie Ristelhueber, in the context of using traces to document aftermath. There are many other aspects of their work which is fascinating and inspirational. I intend to use their War Primer 2 as part of next week’s lecture at the University of Leeds. There are several interesting ideas arising from the work.

First, that documentary can be aestheticised. Art can be political. I have written before on this issue (for example, on the Salgado debate). David Levi Strauss comments:

‘The idea that the more transformed or ‘aestheticised’ an image is, the ;essence ‘authentic’ or political valuable it becomes, is one that needs to be seriously questioned. Why can’t beauty be a call to action?‘ (The Documentary Debate, 2003)

Second, that documentary can appropriate and re-use, evoking memory and crossing time – and creating novel meanings, possibly beyond the original author’s intentions.

And, thirdly, that text and captions not only change the meaning of images, but challenge audience perceptions.

War Primer 2 is a re-imagining of Brecht’s War Primer. This used photographs (often iconic ones) but with new captions to alter possible readings of the images. Brecht wanted photographs to more than visualise and inform. He wanted to challenge the notion of photography as truth, and also to use the discourse to get audiences to approach photography with a more thoughtful, critical view.

‘The tremendous development of photojournalism has contributed practically nothing to the revelation of the truth about the conditions of this world. …. The camera is just as capable of lying as a typewriter‘. (1931)

He took Robert Capa’s iconic D-Day photograph, and gave it a new caption. 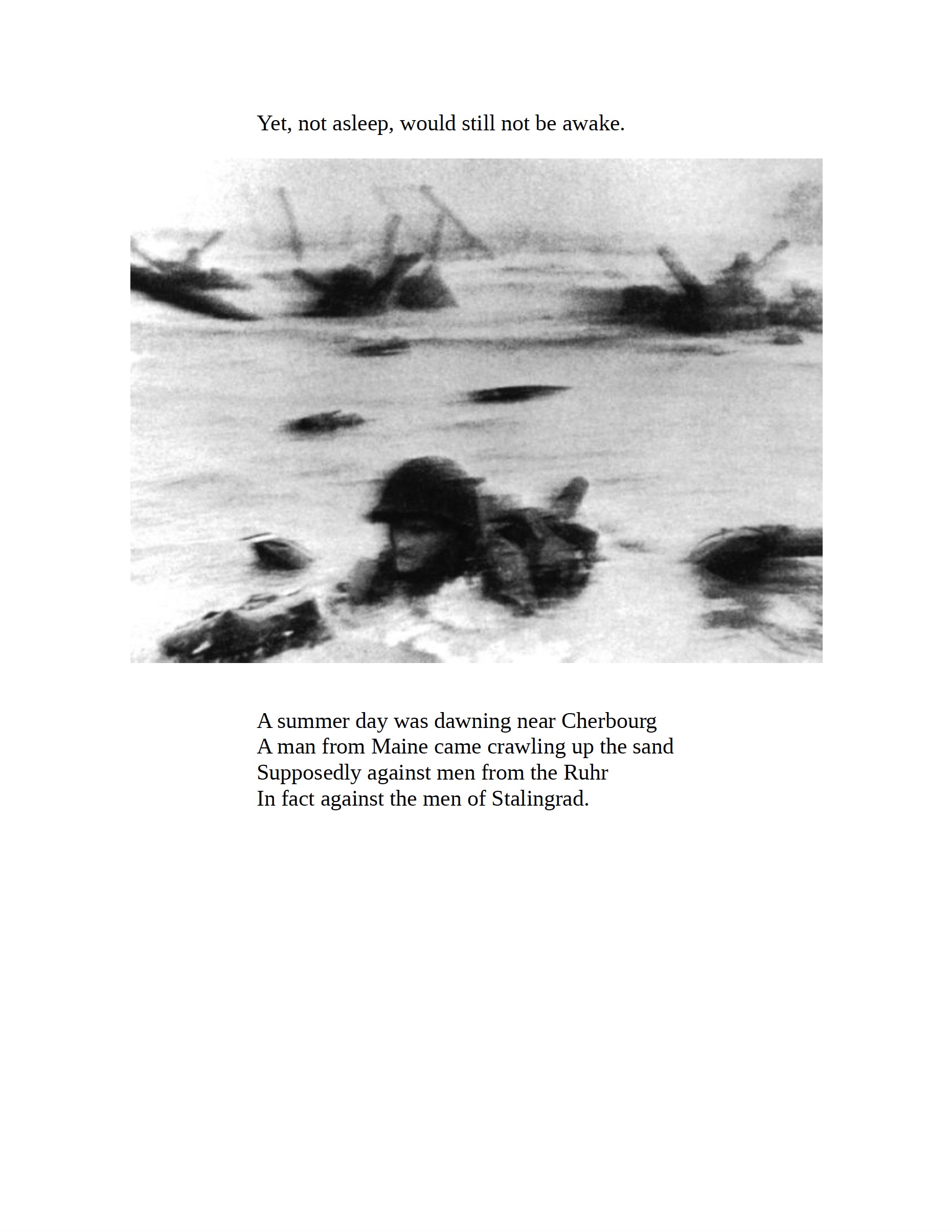 Brecht is suggesting that the ‘real’ reason for the D-Day Invasion was to head off a Soviet takeover of Europe, in the wake of the fall of the Nazis. There is more than a little factual, strategic history, here, as this threatened takeover was indeed an Allied concern. I do not want to get into an extended debate on historic reading, but suffice to say Brecht’s book, which took many years to assemble, challenges the reader (and viewer) at every turn – not just about the indexical nature of the images, but also their symbolic meaning (no apologies to Pierce).

Broomberg & Chanarin took these ideas to another level. In War Primer 2, they re-purposed Brecht’s chosen photographs and quatrains, to critically examine both sides of a then-current war – the so-called ‘war on terror’. 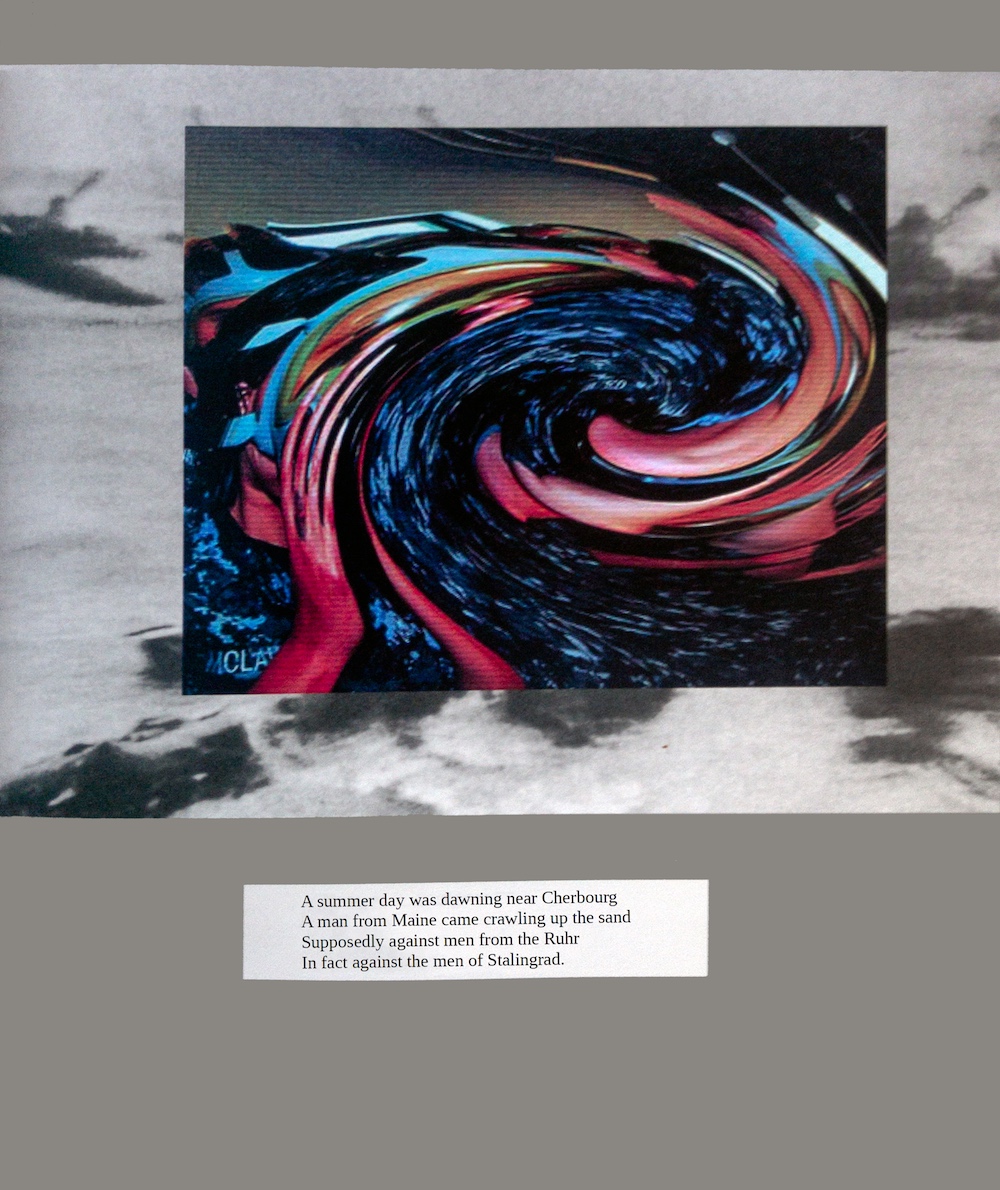 In this image, they have added a rather random image from the Internet (with no detailed provenance). One could make a case that the ‘chemical swirl’ echoes the ongoing debate about Capa’s D-Day negatives – were they indeed accidentally damaged in storage and processing?

But one can also link this directly to Brecht. He held the view that photographs had been chosen for propaganda purposes in WW II. Looking beyond this, Brecht believed that the public should be educated about how to interpret and deal with all photography.

During the Middle East wars, whilst also used for propaganda, photography was severely constrained by the military authorities. There was little official, real-time photo-journalistic reporting in the style of Capa, McCullin or Nachtwey. The images that stand in the public consciousness (Abu Ghraib, for example) were essentially re-purposed as counter-propaganda. Broomberg & Chanarin include this in their book.

Oliver Chanarin, in a 2011 interview with Sarah James for Photoworks, noted:

‘What we’ve tried to do – not exclusively, but in many cases –  is to look at the way that a lot of the images in the Primer speak about images, about image production and the way image production in conflict has changed. Our War Primer II will show the many similarities between images that Brecht collected, of the Second World War and contemporary conflicts, but it will also interrogate the new ways in which cameras intersect and participate in war today’. (Photoworks, 2011).

There are thus multiple layers of interpretation possible, here, which makes both war primers required study for documentarians. I suspect Michel Foucault would see an archive discourse at play here, with ‘archaeology’ and ‘power’ completely intertwined. Brecht redefined an archive of photographs and accepted knowledge, which Broomberg and Chanarin re-purposed and added to across time. Bernadette Buckley calls these acts ‘hacks’.

‘It explores the Kriegsfibel *War Primer) as a dynamic confrontation with images of war and stages the enduring need to interrogate and actively re-function images of conflict from WW2 to the present day. It re-examines debates about images as weapons of war in themselves, and finally, it situates the Kriegsfibel assemblage in relation to contemporary understandings of ‘post-truth’. (Buckley, 2018).

‘I think that now is the most interesting time for documentary photography. Rather than feeling like it’s in its demise, now is a time of real re-birth, in that you need to be more intelligent and more informed. It’s actually about thinking. The art/documentary crossover has added an important element into the field as well, in that it’s not just about putting pictures on the wall anymore. For centuries the art world has been thinking about aesthetic rules, and the rules of engagement and so on. So it has also become about, ‘How do we apply these rules to documentary?’ There’s a lot more studying to be done on the part of the photographer, rather than just looking at the history of documentary photography. And that’s a real challenge’. (From No Statistics, 2008).