The past couple of weeks have been full of gallery visits – Don McCullin, Vincent Van Gogh and Diane Arbus. Dave Heath was at the Photographer’s Gallery – as were the Deutsche Börse Prize shortlist –  Susan Meiselas, Arwed Messmer, Laia Abril and Mark Ruwedel. And I finishing off the week with our very own Ant Prothero.

I have already written about McCullin, and the lessons I had learned. Again, as I toured the galleries for the other shows, I found myself looking at least as much at how things are presented as the work itself

I did not know of Dave Heath, but am so glad that I have discovered his photography.

Heath was an archetypical flâneur, and although he did take some courses in commercial art, he mainly learnt by doing.

In 1952, he was called up to serve in Korea, and managed to do a deal with an army supply company to get 20 rolls of Kodak X-Plus for his Retina, every month. His images are quiet, reflective, and very human. He was interested in people not war. 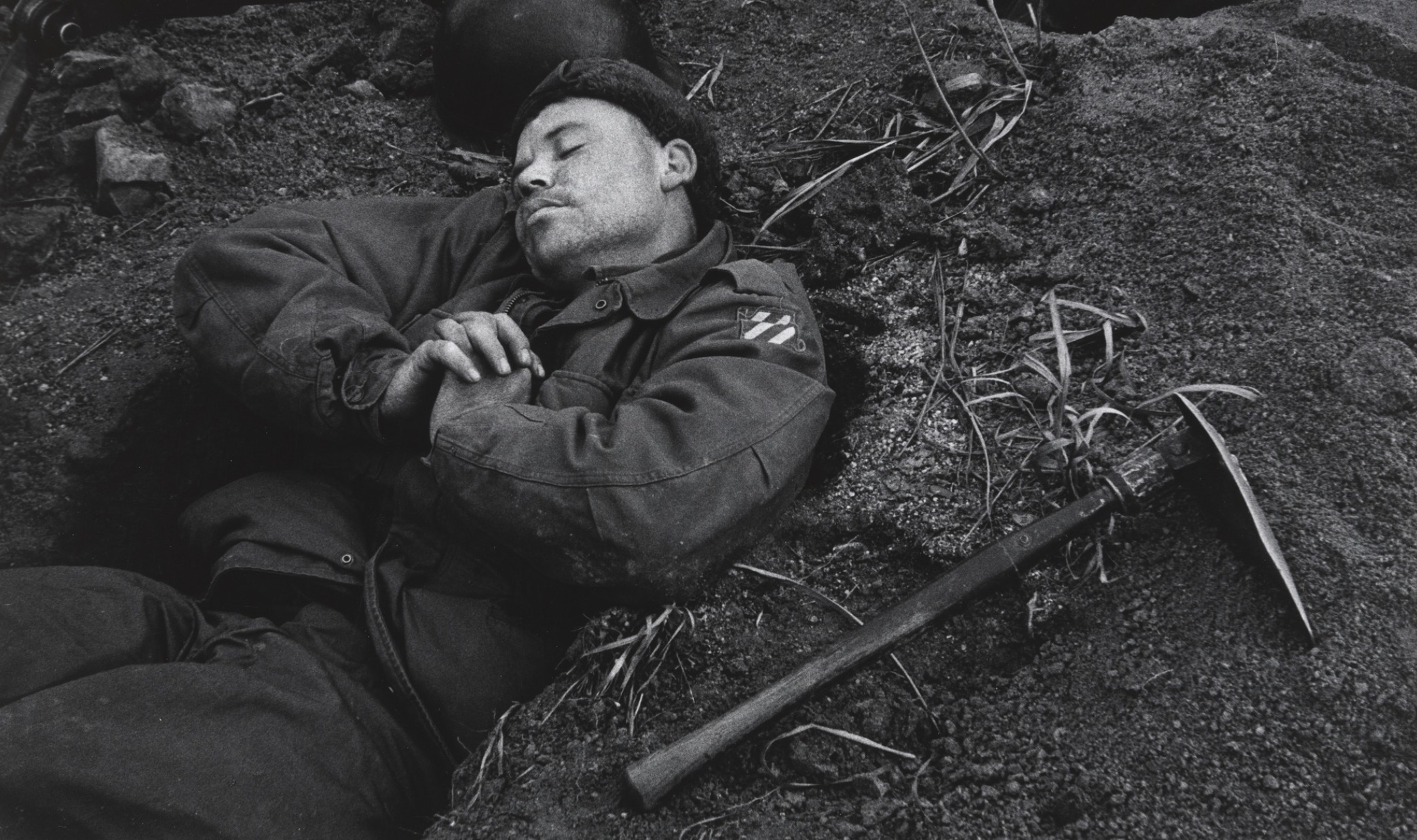 He was very drawn to subjects who looked distracted, lost in thought, and possibly fragile. There is poetry in his images.

That became his life’s theme, and the title of his book, Dialogues with Solitudes, which was published in 1965. 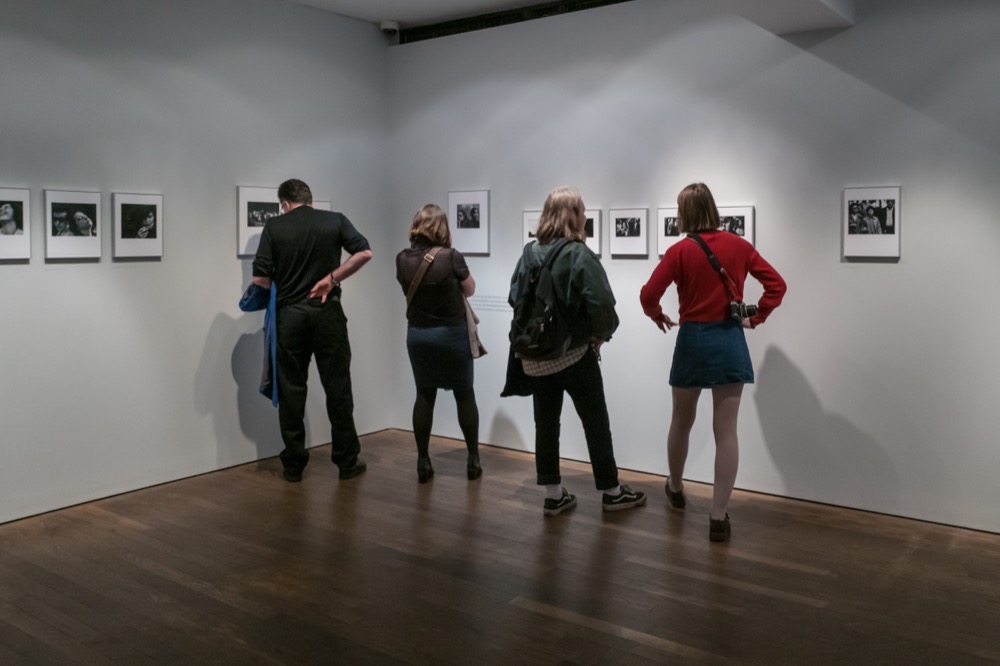 His street portraits were striking – close and with buckets of emotion. Heath often used a telephoto lens, as he was rather shy, and this adds to the intimacy (and grittiness) of the photographs. 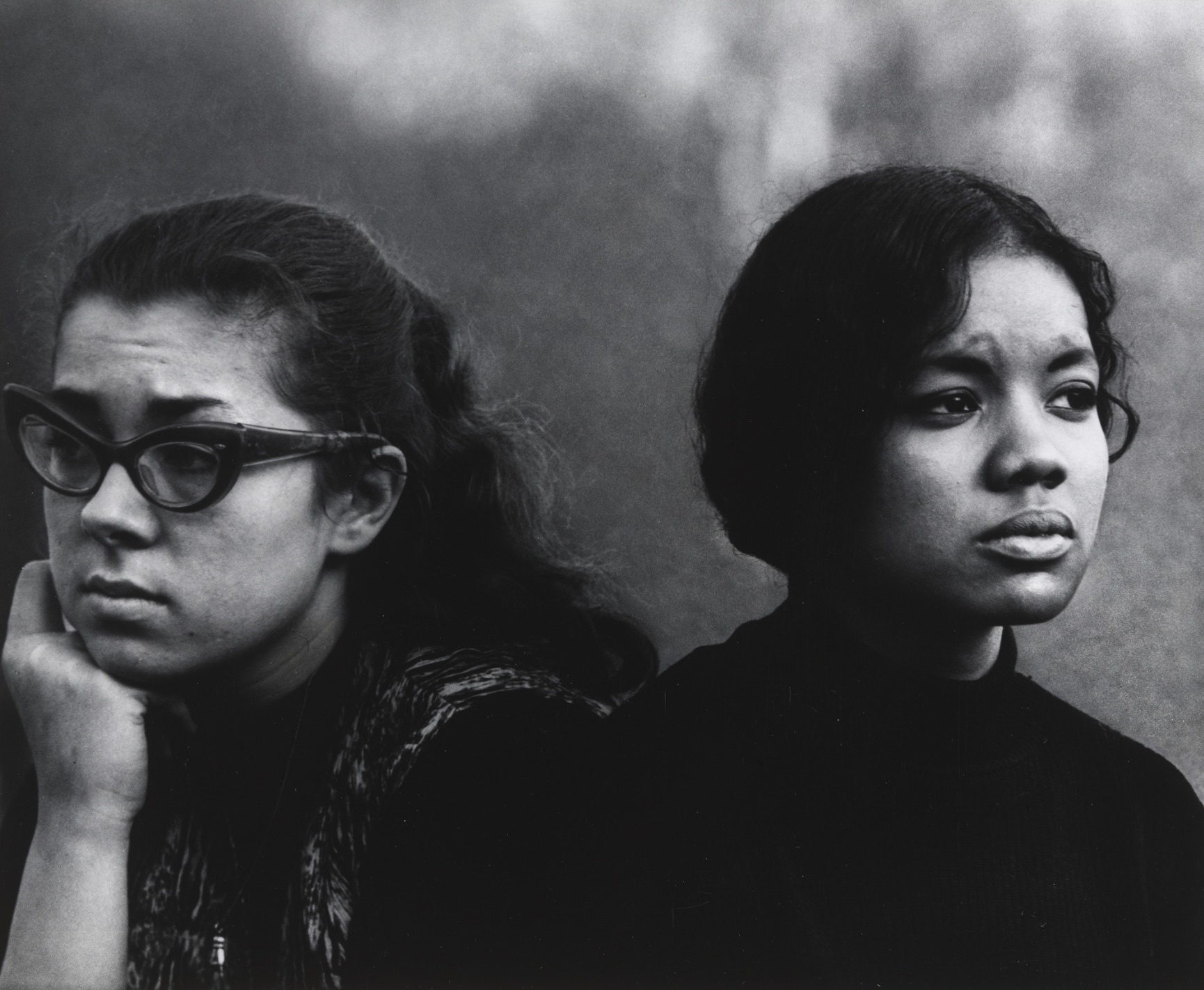 Heath, like McCullin, printed his own work, and the attention to detail was breathtaking. He burned and bleached his prints to put the attention squarely on the details that communicated the meaning and the emotion of an image. Heath learnt some of his skills from W. Eugene Smith. Beautiful, clean whites and rich blacks.

And he was chosen to print some of Robert Frank’s work – clearly a master craftsman. When A Dialogue with Solitude was published, Frank described its mood as ‘late Friday afternoon in the universe’. (Tim Adams, Guardian review). 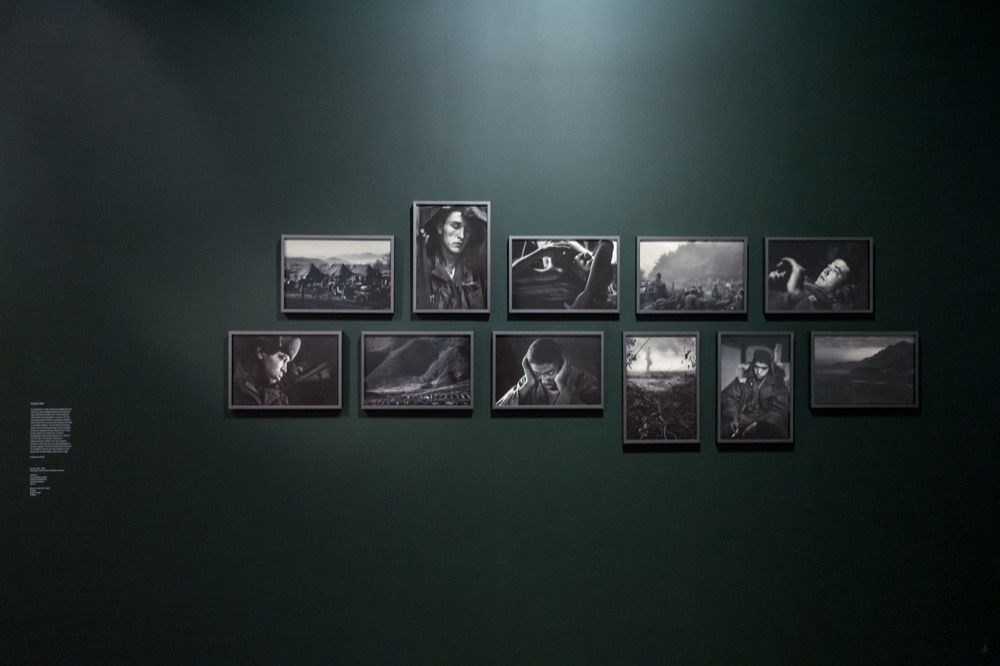 The exhibition was a simple one, but all the more effective because of it. This comment, from The Photographer’s gallery, explained his work process – about sequence, edit and meaning.

‘… this exhibition highlights Heath’s preoccupations with solitude and contemplation and further makes explicit the importance of sequencing in his practice. Heath was clear that “the central issue of my work is sequence” and held the belief that the relativity and rhythm of images offered a truer way of conveying a universal psychological state than a single image.  He perfected a form of montage, often blending text and image to create visual poems, which captured the mood of the decade in a manner akin to a photographic protest song‘. (The Photographer’s Gallery review).

Putting this idea of sequence into an historical perspective, from the 1988 interview with Michael Torosian, Heath commented:

‘The thing about poetry is that there are very definite forms that have developed over millennia of poetry writing. In haiku, for instance, the structure was rigidly established and the subject matter was always given. But photographic sequence is relatively new. Every photographer you can point to who has worked in sequence has contributed something different. there are no overall forms to be handed down‘.

This idea, of finding the ‘right’ sequence has direct bearing on my project.

In many ways, this was a  classical show, where the content was quite literally king. I particularly enjoyed seeing a display of his work shown as large negatives. 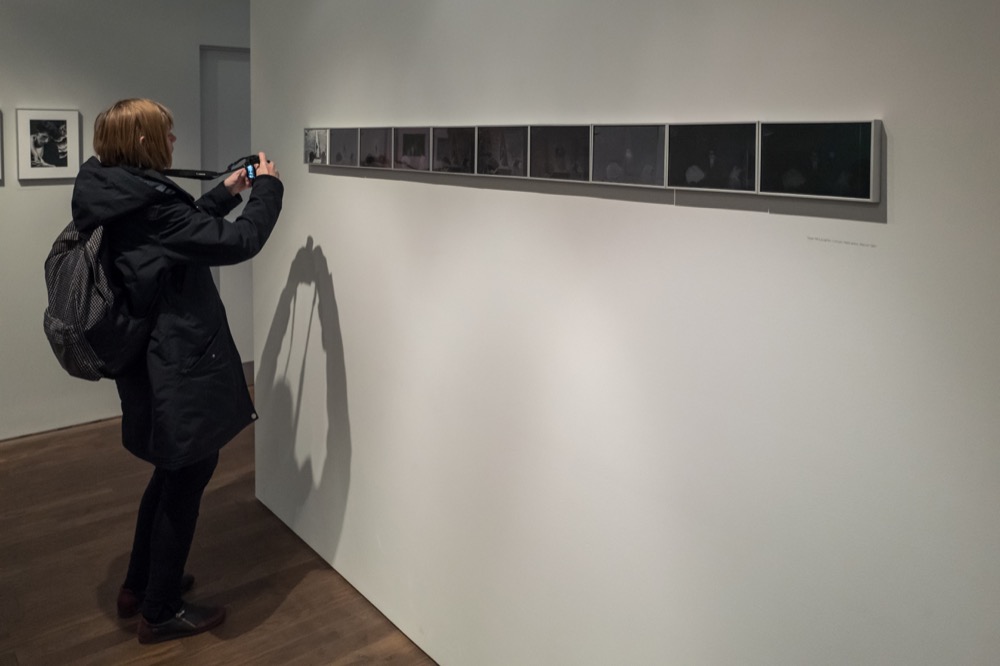 Heath’s book about the exhibition, a re-make of Dialogues of Solitudes, joined my collection.

A last quote from Heath is memorable, defining his practice as a need to create community:

‘The fact that I never had a family, a place or a story that defined me, inspired a need in me to join the community of mankind. I did so by inventing a poetic form linking this community, at least symbolically, in my imagination, through this form’. (The Photographer’s Gallery review).

Arwed Messmer dealt with the history of the red Army in Germany in the 1970s. His was a multi media show – photographs, posters, magazines, hand printed books, press clippings and a carousel of slides. 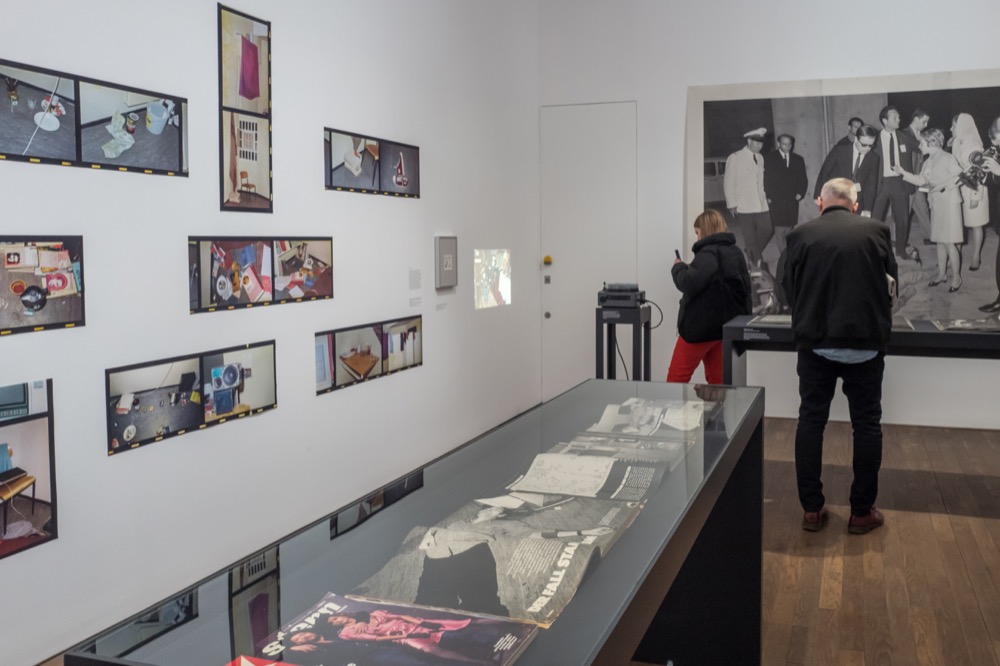 Messmer hung unframed photographs and ‘slide scans’ on the wall. 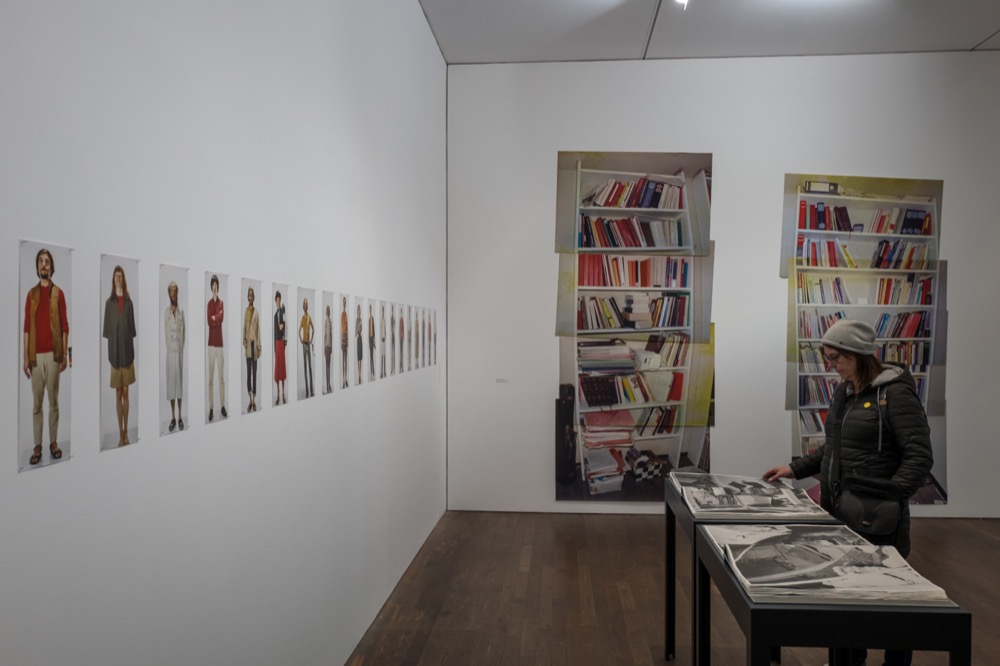 I particularly loved the large, hand made books which the audience could interact with, turning the pages. 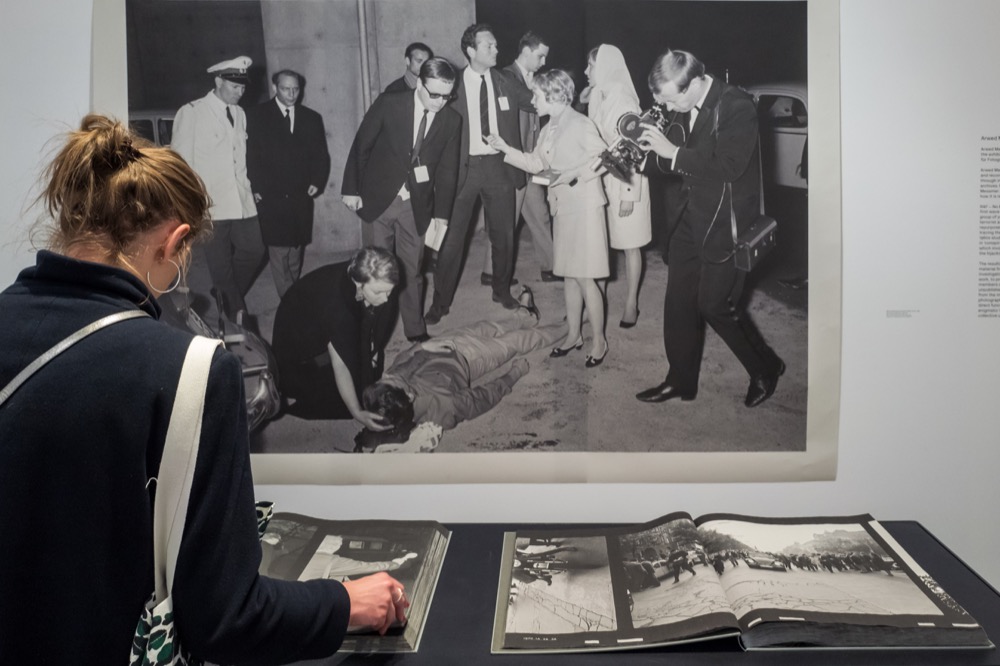 Laia Abril‘s show was similarily multi-media. In fact the exhibition was built around her meticulously researched book on abortion practices and issues over the years.

It was a very powerful and thought provoking show, made the more powerful by the understated way that Abril presented, for example, instruments of amateur abortion and birth control. She also crafted individual stories, with stark, large portraits.

Everyone was reading the stories, watching the movie and so forth. A very engaging presentation on a  serious subject. 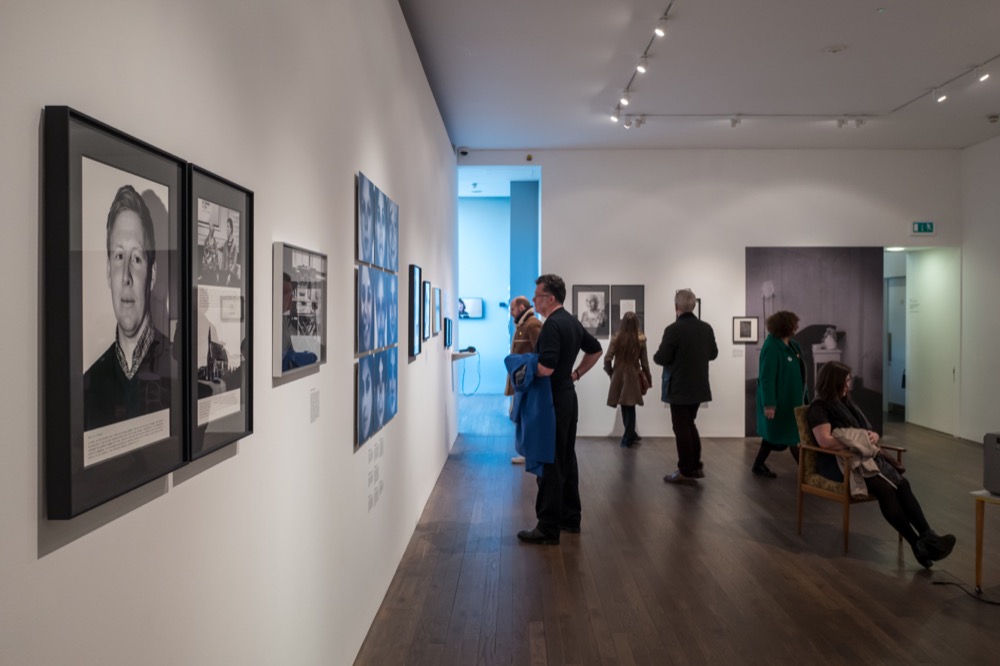 Mark Ruwedel‘s exhibition was back to a classic mode. Beautiful landscapes, but, frankly when the show came after the others, well, let’s just say that not too many people lingered.

The highlight, for me, was Susan Meiselas. Her show was built around her Kurdistan work. I have that book, which is mind-blowingly detailed in its mixture of old and new photography, history, artefacts and personal stories.

And the show captured that spirit in its presentation. 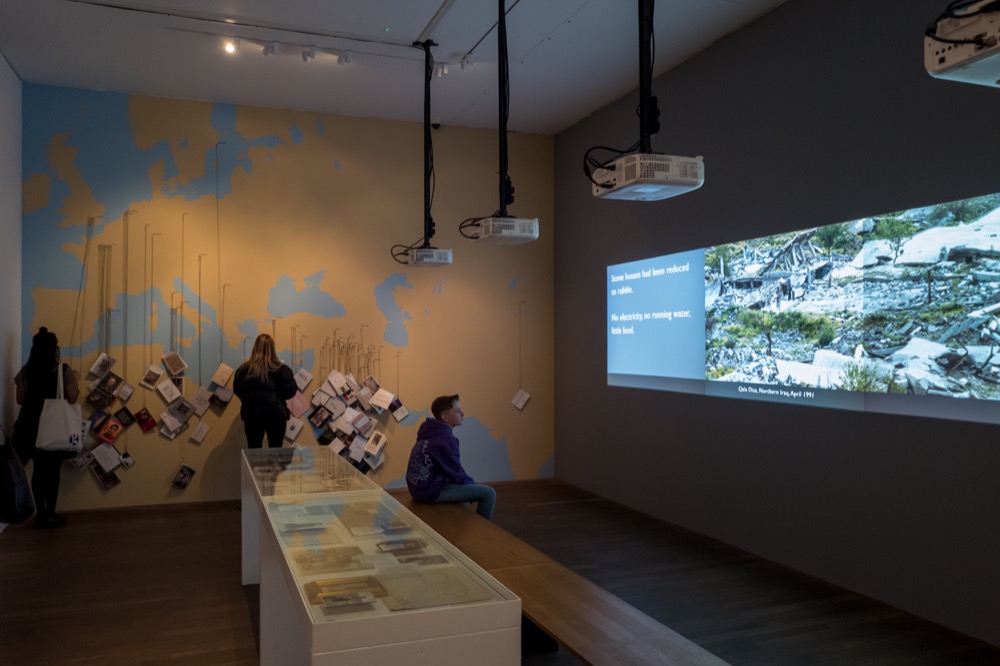 So many things to enjoy, although the presentation of personal, short stories – hanging plasticised booklets on the wall, from the city where the story came from – was sheer genius. In a gallery full of interesting exhibits, people did seem to really study what Meiselas had put before them.

A lovely one, again using various media and built around that beautiful book. Still, at Ipseity, we were friends together, so maybe we (I?) spent too much time just having fun. 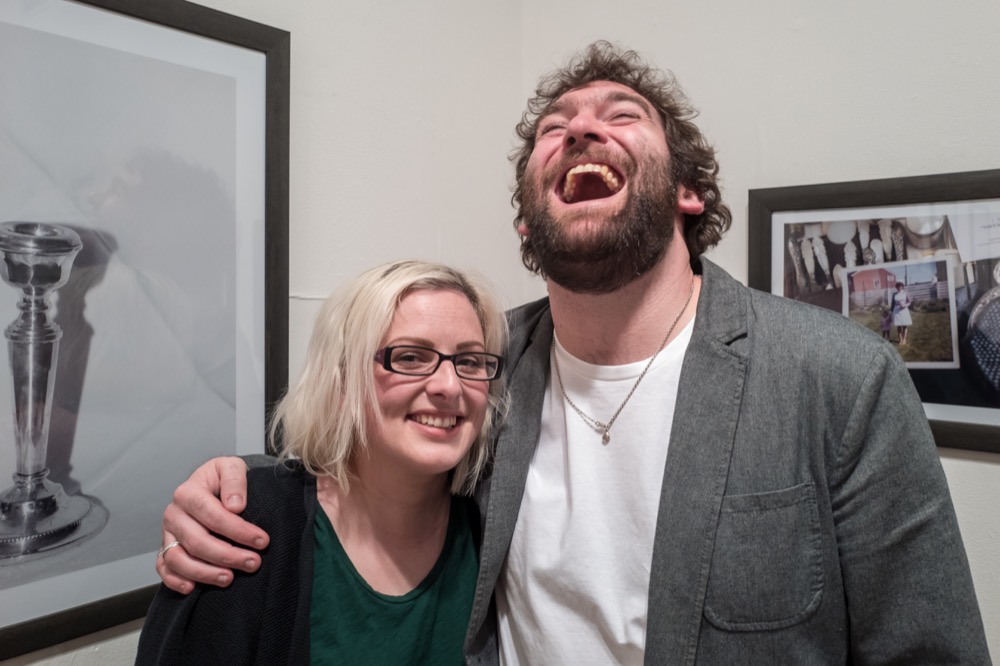 All photographs, unless stated, Mick Yates, 2019.

ABRIL, Laia. 2018. On Abortion: And the Repercussions of Lack of Access. Stockport: Dewi Lewis.

MEISELAS, Susan. 1997. Kurdistan: In the Shadow of History. Chicago: University of Chicago Press.