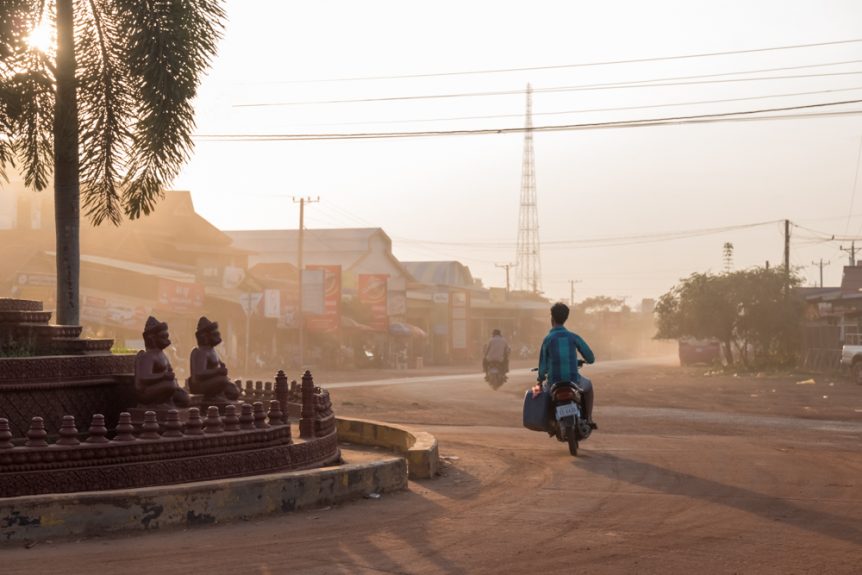 I sometimes try to separate the photographic focus of the MA, and my personal role as a ‘Cambodian Educator’, of almost twenty years standing, as I want the Project to focus on Sarath. But this trip blurred all of those lines.

This post complements my Week Six Reflections – Part One on the latest Cambodia trip. That post covered the ‘mechanics’ of getting things done in Phnom Penh (and networking). This deal with the impressions from the countryside.

We have visited Preah Vihear several times before, yet this time it seemed ‘sanitised’. There is still a Royal Cambodian army ‘front line’, against possible Thai attacks. But almost all of the detailed detritus of previous conflicts has gone. No land mine signs, no empty shell cases or grenades, no field artillery. The main reason for visiting was to photograph ‘traces’, so frankly some of that purpose had gone. I will rely on archive material.

Still, there were other things to photograph. We also got to talk to quite a few of the kids. One of the most instructive was Hong, 13, who admitted that he sometimes ‘hustles’ tourists in a very friendly way to try to help pay off family debts. Most telling, whilst his companions all said he was an excellent student, he wants to be a soldier ‘as they get things done’, more than policemen do. We had a debate about being  teacher instead – time will tell. It is clear though that years of military activity / occupation leave a very clear mark on children, even today. The road trip allowed Sarath and myself to discuss many things, especially education. More than once Sarath said that education, good and bad, was everywhere. He sometimes reflects on what he learnt from those awful Khmer rouge times, and even applies some of those principles, of rather bloody-mindedly and egotistically (my words) making things happen against the organisational odds in his work today.

I have been reading David Ayers excellent book, Anatomy of a Crisis, which suggest that the Cambodian education system has consistently failed to create a free-thinking, innovative (middle) class. At a macro level, one can only agree. But the street hustle is alive and well.

Socheata prices her banana bunches according to the intended use – as presents, for cooking, for animal feed and so on. I was conscious as I took these documentary photographs in the countryside of attempting to create more ‘intimacy‘ in the images, including with different framings, as in this portrait. Several times along the way Sarath had been asked to conduct workshops for the teaching staff. To say he was something of an educational ‘rock star’ is an understatement. Every session overran, and in one I literally walked way with the keys to our 4×4 to draw it to a close! We decided to take an unplanned and unannounced detour to Trapeang Prasat.

As noted elsewhere, this is the site of our first school. In July we learnt that Chinket Meta, who started in the grass roofed village school, went to the new school, successfully navigated the system and was now studying for a PhD in Japan. We stopped by the home of the now-retired Education Director, Prach Sopaorn. As a matter of history, he worked alongside Ta Mok, the KR Military Commander (aka The Butcher) until Ta Mok’s arrest. We first met him in 2000, when the area had zero public communication infrastructure. This time, the two of us were figuring out how to share photos over Facebook!

Deciding to go to the original school, we were presently surprised that word had got out (social media, of course) and several teachers arrived on site – it was a national holiday, so even more touching. A big new three storey building was now completed on the site, due for formal opening this month.

We learnt from the School Principal, Keo Saroeurn, that when Prime Minister Hun Sen had visited these cool in 2016, to agree the new building, he refused to let it be built in front of our much smaller wooden structure.

‘The Yates family supported us when we were poor, and we should respect that. They were here first‘.

And, in 2018, on revisiting the site, he turned down the idea of dismantling the old school, even though it blocked the view of the new one, for the same reason. The enlarged school will be renamed ‘Hun Sen – Yates Family Primary school’. We made a short video of the story being told.

I plan to write to Hun Sen to show our appreciation. The next day, and on a less pleasant note, Sarath and I found two Killing Field sites, one at Rovieng and another at Kampong Thma. Neither got much tourist traffic. There was a small pagoda at Rovieng, commemorating what had happened, but no real traces of events, there.

It was in fact a rather lovely site, despite our knowledge of its terrible history. We talked to some of the local families, including one that tends the site. The children all seemed to be aware of the bad things that had happened, but not really in any detail. As Youk Chhang is fond of saying, a country that cannot confront its past, cannot move on.

At Kampong Thma, it was different. We walked through a lovely if somewhat dilapadated pagoda complex, with many stupas. And we can across one particular stupa which was frankly was a surprising sight. It was unlocked. We talked to some locals, but here it was a group of young kids who knew the story, Roughly 20,000 people had been murdered here, with most of the bones collected in this stupa. The Killing Fields were all in the grounds of the pagoda.

Tellingly, the kids said that whilst their grandchildren tell them stories about the place, they are mostly exaggerated ‘ghost’ stories. Their parents generally do not want to talk about what happened. The kids got most of their information from their school teachers, which is a good sign.

Related, I have been reading a couple of DC-Cam’s books, about Anlong Veng. This was the last holdout of the Khmer Rouge, and Trapeang Prasat sits inside the district.

‘While Anlong Veng was clearly within Ta Mok’s controlled area, Trapeang Prasat appeared to be a Pol Pot administered are.’ (pg 83)

As we were visiting Trapeang Prasat, we did ask the village leadership if they knew Ta Mok, as he was the last KR to surrender in Anlong Veng in 1999. It never crossed our minds to ask about Pol Pot, who died in 1998.

‘Unsurprisingly, while many ordinary people who lived in Anlong Veng’s downtown were familiar with Ta Mok, very few had ever seen Pol Pot’s face. Instead Pol Pot was said to have closer relations with the soldiers and people living in Trapeang Prasat where Pol Pot planted rice and often visited the people’. (pg 84)

Next time, I will be researching this more with the local people, to see if that affects my narrative.

On the flights back, I read Nic Dunlop’s 2005 account of finding Duch, The Lost Executioner. Duck (pronounced Doik), was the S-21 Commandant and the first to stand trial after the war, now imprisoned for life.

I particularly took note of Dunlop’s comments related to apparatus of photography:

‘‘For the prisoners of S-21, once they were photographed they could never be anything but guilty – a kind of trial by camera’. (pg 148)

‘All the photographs of the prisoners were single portraits … as if the act of taking the photograph somehow reduced them in size … and [made them] in the minority’. (pg 149)

‘By contrast the photographs that survive of the Khmer Rouge identify them as part of a group, like school photographs or members of a team … deeply political and moralistic images that reflected an idealised vision of the revolution’. (pg 150)

‘… if I found something distressing my reaction was to photograph it, distance it and move on. The camera had acted as a kind of filter to what I was seeing. Like the people of S-21, people had become mere objects in my viewfinder’. (pg 151)

Reminiscent of Michelle Caswell’s later observations in Archiving the Unspeakable (2014).

I also wonder to what extent Flusser‘s comments apply.

‘First, one can outwit the camera’s [programmed] rigidity. Second, one can smuggle human intentions into its program that are not predicted by it. Third, one can force the camera to create the unpredictable, the improbable, the informative. Fourth, one can show contempt for the camera and its creations and turn one’s interest away from the thing in general in order to concentrate on information’. (pg 80)

With that in mind, it seems to me that the photographers at Tuol Sleng were slaves to both camera and process.

My reflections on this part of the trip?