Today is Deepavali / Diwali, the traditional festival of light, when there is victory over darkness, good over evil and knowledge over ignorance, and a most appropriate day for reflection. The final words in Melissa Miles’ latest book, Photography, Truth and Reconciliation sum up the role of photography in bringing light where there is or has been darkness.

‘ … the nexus of photography, truth and reconciliation in contemporary culture has not only affected the types of stories that are being told about the past, it is changing the ways that people relate to it. These practices encourage us to think about how bearing witness through photography involves an amalgam of indexical and narrative qualities, always measured in slightly different quantities and interspersed with distinct experiences, discourses and histories. Despite the hopes commonly expressed in TRCs, bearing witness cannot ensure that gross human rights violations will never happen again, or that survivors will be healed of the effects of lingering traumas. But photographs can tell us something very valuable about how we approach the past and live with it, however uncomfortably, in the present’. (2019: 176).

Miles comments that such photographic work is often about exploring the silence, and uses the work of Mak Remissa and others to illustrate this point in Cambodia. Remissa, who I am honoured to know, observes that memory fades, and silence therefore takes its place.

‘ … the story of the genocide that happened between 1975 and 1979 in Cambodia has faded gradually away from people’s mind, like smoke being blown away by the wind’.

There are many approaches to making the silence disappear, which I reflect fall on a continuum.

At the simplest level, there is bearing witness. This is what visitors to Auschwitz do, as do those at Tuol Sleng and Choeung Ek. Sometimes these visits are is to seek closure on personal tragedy, sometimes to offer profound respects, and sometimes to say ‘been there’. But the visits are always acts, not thoughts.

Pictures taken provide memories for the photographers. And sometimes pictures can provide the world’s collective memory of an event, as the mug shots of Tuol Sleng do. These photographic momentos are important, as Michael Ignatieff, in the essay introducing Simon Morley’s For most of it I have no words, notes:

‘What these photographs tell us is that even infamy is subject to entropic decay. Even large and terrible crimes are eventually forgotten, even horror turns into dust and sand. This is hard to bear. We do not want to live in a world where crime escapes punishment, where evil escapes being called by its proper name, where infamy is swallowed up by sand and wind. Entropy is a moral scandal. For if everything is forgotten, if all headstones decay, what is the point of grieving? (1998).

A similar mechanism is at work in revisiting sites of natural disaster (Tsunami, earthquakes) or man-made accidents (Chernobyl). Especially in the former, humanity actually works hard to reverse the impact of the disaster – we witnessed that first hand in the Great Hanshin Earthquake in 1995. Human entropy.

There is an element of ‘dark tourism’ at work throughout, when one visits and photographs such sites, which, if taken literally is a rather negative, voyeuristic activity.

I find Philip Stone’s typology helpful in distinguishing between such places and our response to them. He suggests ‘shades of grey’ not binary thinking. 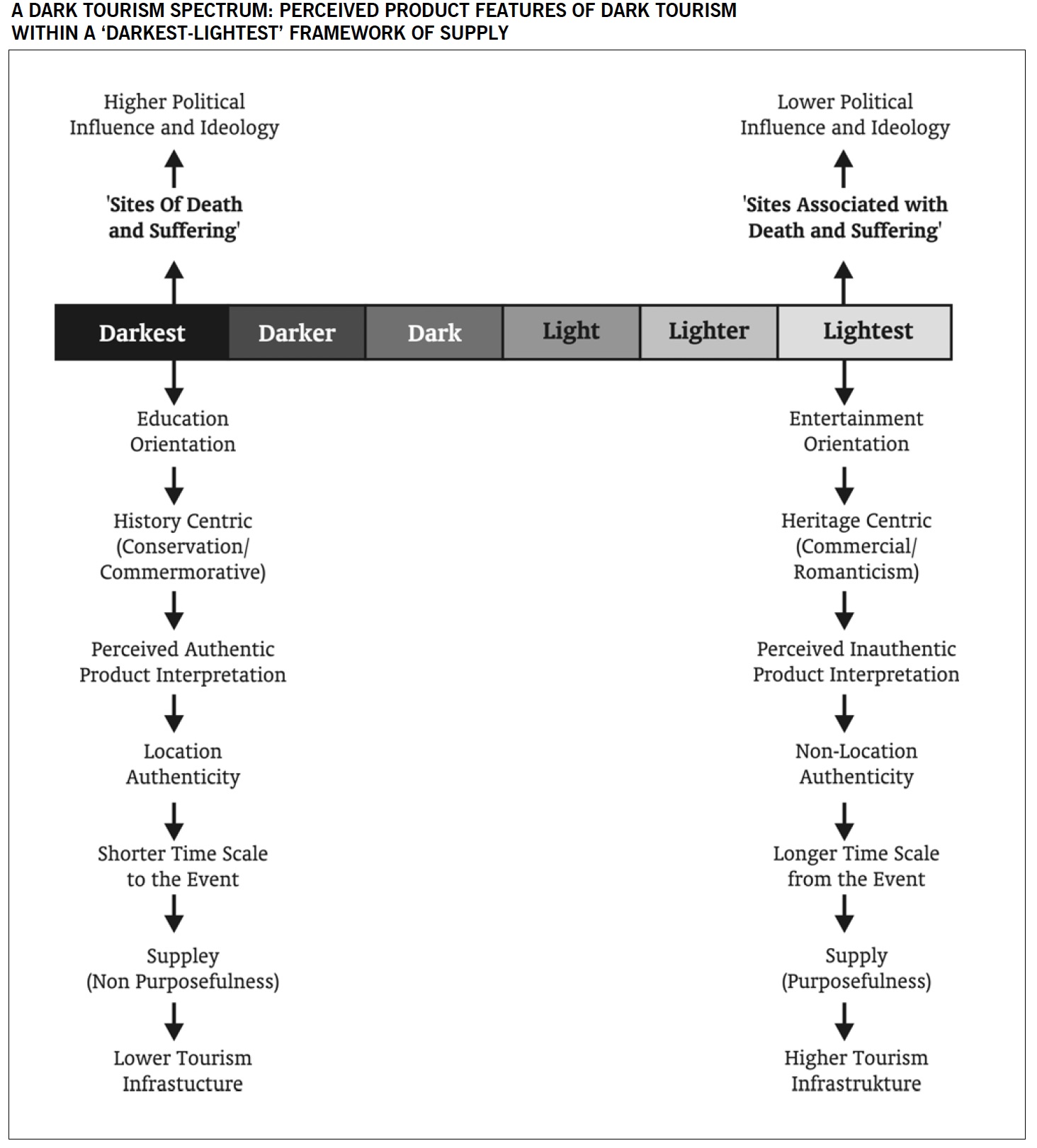 Philip R. Stone. 2006. A Dark Tourism Spectrum – Towards a Typology of death and macabre related tourist sites, attractions and exhibitions.

In Stone’s, typology, visits to Tuol Sleng fall into both the darkest sites and the highest importance ideologically.

Even the most well-intentioned of photographs can fall gradually into the ‘dark’ genre  – the seeking of thrill, however unconsciously. But it is not all ‘bad’. I rather see this activity in the performative sense that Bowman and Pezullo suggest – as an action of hope, a positive movement.

‘ … death is not merely an event in our past. Negotiating memory is not just about preserving history, but also about shaping the present and the future. As such, it seems worth further exploring how some tours at sites of death open up possibilities for solidarity or alliance-building, particularly those that are sites of environmental disasters (from tsunamis to industrial accidents, such as Chernobyl, to ongoing polluting industries that threaten public health, species extinction, and ways of life for specific cultures) and/or social injustices (from prisons to sites of politically or ethnically motivated violence)’. (2010: 194)

There is also a narrow line between meeting the Kantian sublime with a ‘negative’ image, and voyeurism. Jean-François Lyotard has perhaps done more than other recent philosophers to explore what this means in a modern world. Simon Morley comments that Lyotard:

‘… sees art’s role as shattering people’s common-sense understandings of the way the world works. He argues that realist art serves to reassure this common sense, but that modern and postmodern art employ the sublime to demonstrate understandings limits and point to new possibilities’. (2010: 50).

Simon Norfolk’s work uses the blunt instrument of showing what remains – the skulls, the mug shots, the torture instruments. Sophie Ristelhueber portrays the aftermath. Both are using what is actually there to create a nudge to the memory, to suggest new thoughts and reflection. Both use landscape and urban traces within it. But neither make the reflections personal, either to them or to those affected. Norfolk in particular seems to be rather distant from what happened, observing rather than commenting.

At the other extreme is to use photography as part of a process of full and open reconciliation between the oppressor and the oppressed. South Africa’s Truth and Reconciliation process is perhaps the exemplar.

The work of DC-Cam (Documentary Center of Cambodia), initially started in a partnership with Yale, is all about using records of all kinds – photograph, movie, text – to both record atrocity and make it visible. The Center has the largest collection of data on the Genocide in the world, and Cambodians still use the database to find details of what happened to their loved ones, in the provision of closure. DC-Cam’s work has been key to the UN-Cambodia Extraordinary Chambers in the Courts of Cambodia, who have tried several Khmer Rouge leaders for war their crimes against humanity. Perhaps the ultimate reconciliation.

The ECCC is also trying to deliver a different kind of reconciliation, based on public education, but with limited success. Sok Udom Deth is one of many scholars who has unravelled the tangled mix of geopolitics with Cambodian history. As the ECCC’s mandate is temporally fixed to the 1975-1979 period, they cannot provide discussion of the US bombing which helped pushed the country into the arms of the Khmer Rouge, or Chinese involvement the regime, or linkages to the current Cambodian political elite. The efforts of DC-Cam, under Youk Channg’s leadership, have provided the core of education about the context of Genocide within the country.

My colleagues from the University of Leeds, in partnership with DC-Cam, are also working to open up the discussion between young and old in the spirit of truth and reconciliation, although this remains relatively small scale.

Yet all of these efforts can too easily get enclosed within the prevailing narrative of ‘a few terrible people’ caused the Genocide, as shown by Rebecca Gidley, rather than deal with the atrocity systemically. This has always suited the local political and geopolitical powers. Realistically, I cannot see this narrative changing, as there are few centres of influence who really want the truth to be fully explored and who have the resources to do so in a significant way.

Youk is attempting to create the Sleuk Rith Institute, which would be a world-class centre not just for Cambodia but for global research, but funding is hard to come by. 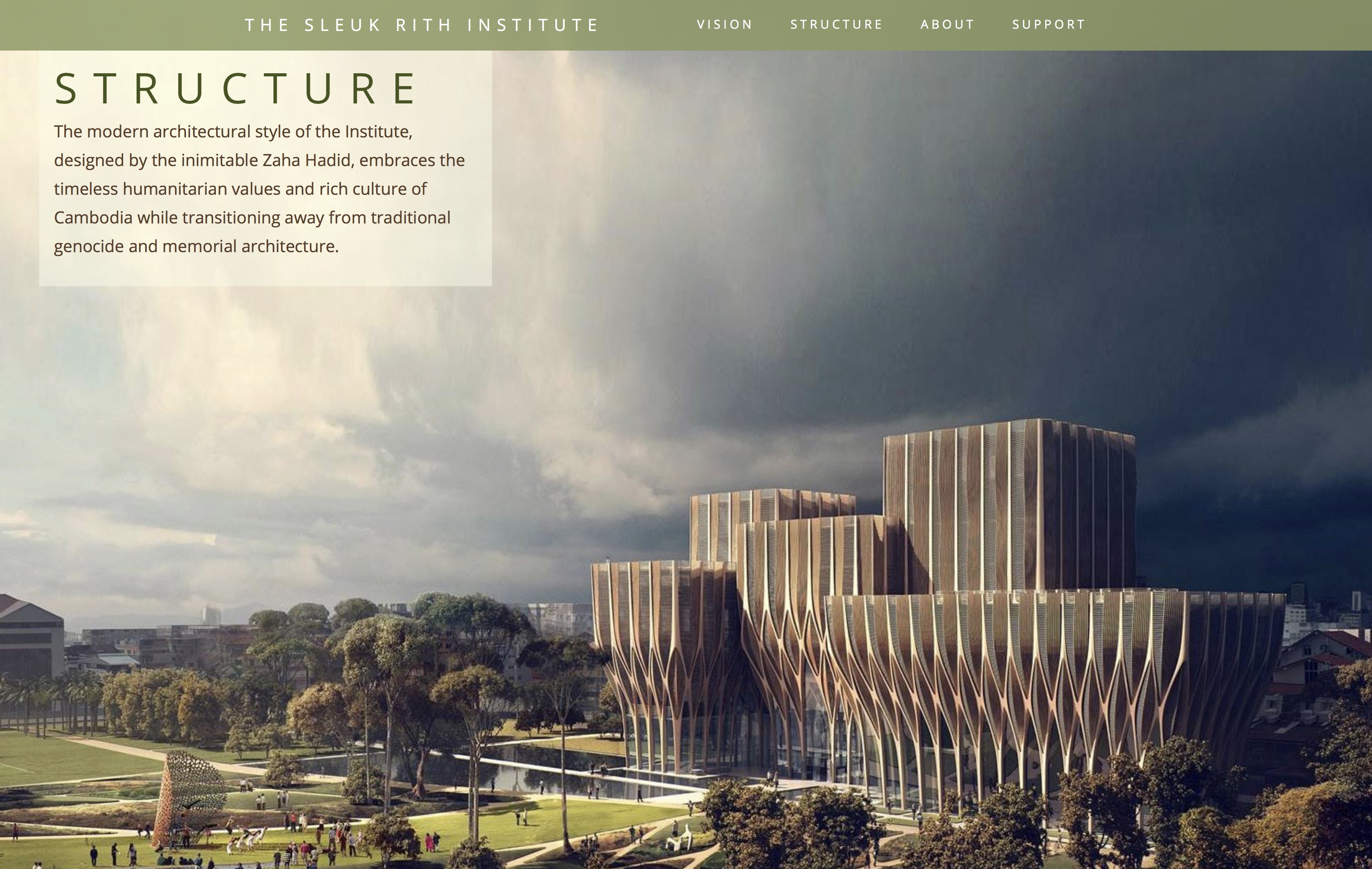 There is a genre of work, which includes my own, which seems to fit in between the two extremes. Even a cursory look at the bookshelves at Phnom Penh airport will reveal a raft of  texts about individual recollections of ‘Pol Pot times’.

Chum Mey writes of his time as a prisoner at Tuol Sleng, and he will pose in his old cell for tourist pictures. Nhem En was the photographer responsible for the mug shots, and he says ‘I had no problem at all in taking photographs of the victims’ (2014: 38). Vann Nath memorialises what happened with paintings constructed from his eye witness accounts of the torture. 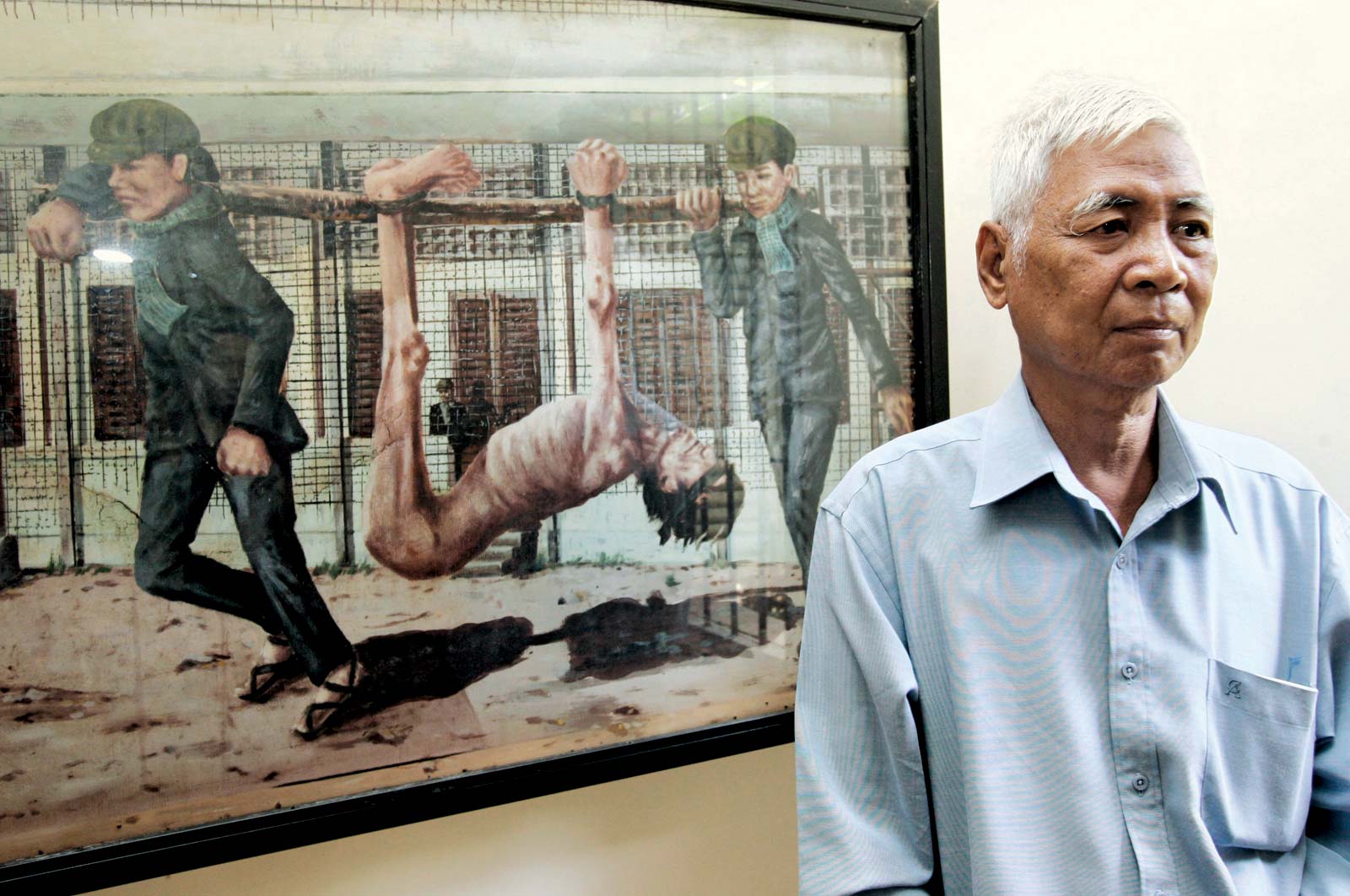 Mak Remissa. Undated. Vann Nath and one of his paintings.

One might argue that dark tourism is at work when these books are purchased at the airport – but that would be churlish. All are important and add to the historical record. And I am sure that all are personally important to the individual who wrote the book. In a situation where victims get no government financial support, the commercial side of their reflections is also both valid and necessary.

A more substantive critique would be that none provide context for what happened and why, but that is not at all surprising given the prevailing ‘individual’ narrative around the Genocide.

It is here that I would like my own work to sit. Breaking the silence with deeply personal stories of Cambodian’s who suffered, yet also providing both temporal and geographic context via my photography and contextual explanations..

Mak Remissa. Undated. Vann Nath and one of his paintings. Available at: https://www.britannica.com/biography/Vann-Nath (accessed 27/10/2019).

GIDLEY, Rebecca. 2017. The Political Construction of Narrative and Collective Memory in Cambodia. Situations: Cultural Studies in an Asian Context, 10.1 (2017): 99–118. Available at: https://www.academia.edu/32111852/The_Political_Construction_of_Narrative_and_Collective_Memory_in_Cambodia_by_Rebecca_Gidley (accessed 6/05/2019).

NORFOLK, Simon & IGNATIEFF, Michael. 1998. For Most Of It I Have No Words. London: Dewi Lewis.