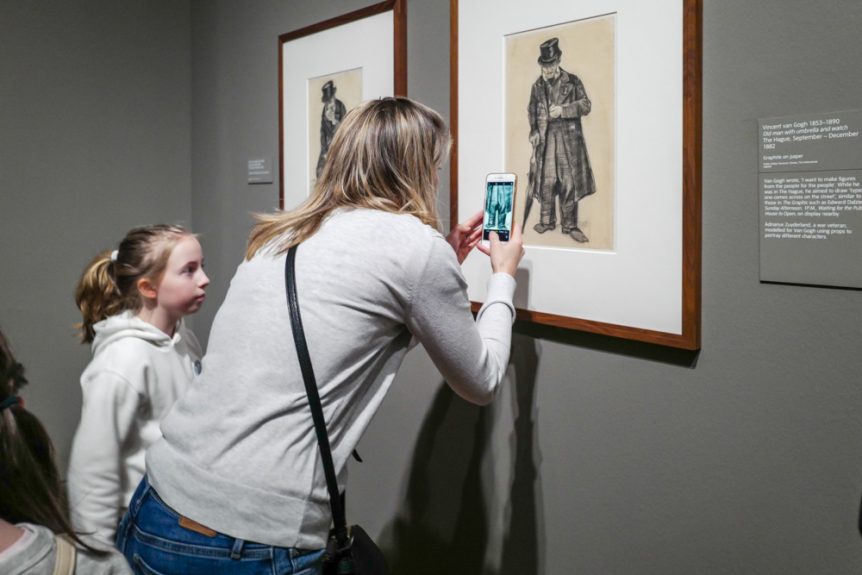 Several days were taken up ‘looking’ at art and photography, this past week. I separately posted about the McCullin show – just brilliant. I won’t repeat the details, but the reflections on how people ‘consumed’ the McCullin, Van Gogh and Arbus shows have helped me think about what I want to do in the FMP.

Related, I am also currently (re) reading  Hariman & Lucaites The Public Image. This is by far one of the favourite books on my shelves.

Re-defining journalism as a public art opens up a new discourse – and is yet another nail in the coffin of the nay-sayers about documentary work. It actually rekindles some of the excitement I feel in my practice, which Sontag, Barthes and others manage to stifle.

The authors take head-on any thoughts that the industrialisation of photography diminishes their meaning as valid documents. Bluntly, a written critique of the same photographs would have the same effect. So, substitute writing for photography and you get the same problem – except that has not stopped writing being a continually useful and innovation medium of expression of all kinds.

One imagines that even Plato complained that writing was a false substitution for the public art of rhetoric.

‘[Siegfried] Kracauer defined photography as being shaped by two generative principles: “there is on the one side a tendency toward realism culminating in records of nature, and on the other a formative tendency aiming at artistic creations.”

As he also noted, this tension generated the aesthetic problems for the medium. He could have added that it offers one explanation for the conventional division between documentary photography and fine art photography, as each side emphasized one media capability or the other while trying to avoid compromises that could undermine either ethical integrity or artistic innovation‘. (pg 57). Siegfried Kracauer. 1960.

Every image, and that includes those of journalism and documentary will be judged both by the spectator’s sense of reality AND their imagination. Of course, some images might have more ‘imagination-stirring’ content than others. Even here, Sontag diminished the impact on the imagination and belittled the representation of reality.“

‘Photographs are, of course, artifacts. But their appeal is that they also seem, in a world littered with photographic relics, to have the status of found objects-unpremeditated slices of the world. Thus, they trade simultaneously on the prestige of art and the magic of the real. They are clouds of fantasy and pellets of information‘. (Hariman & Lucaites, 2016: 63 – Susan Sontag, 1977: 69)

Whilst it is hard to argue that any one image can be more than a ‘fragment’, Sontag does seem to deny any possibility for a photograph to be part of something bigger than itself. It’s just a pellet. And in calling the imagination aspect a ‘cloud of fantasy’,  she is channelling Baudelaire, in belittling the mechanical technology at work, and indeed the spectator’s role.

It is perhaps no surprise that mass culture has taken so enthusiastically to photography, despite the most fervent hopes of the prophets of high culture.

Susan Buck-Morss states quite forcefully that:

‘The complaint that images are taken out of context (cultural context, artistic intention, previous contexts of any sort) is not valid. To struggle to bind them again to their source is not only impossible (as it actually produces a new meaning); it is to miss what is powerful about them, their capacity to generate meaning, and not merely to transmit it ….‘ Susan Buck-Morss. 2011.

But, as Kant noted, imagination happens in the mind, and minds deal with both continuity and change. Ariella Azoulay commented that there were three modes of seeing – ordinary, technical and civic.

‘The civic spectator is one who sees through a frame of ongoing discussion about public affairs, who assumes that other spectators also are seeing and discussing the same or similar image, and who forms opinions and enters into relationships by doing so’. (Hariman & Lucaites, 2016: 15)

Wendy Zozol goes so far as to suggest that the resultant confusion, debate and ambivalence about meaning is indeed a pre-requisite for ethical spectatorship, the right and wrongs of an image.

So, images can and do have multiple meanings and interpretations, and context is everything.  As to the debate that digital changes everything – the answer is plainly yes and no.

Yes, in the sense that the photographic process changes, and even more our modes of dissemination (see my post on Digital, which lists all the ways we use that one word to mean so many different things.

No, in the sense that all digital apparatuses are programmed to behave (for humans) the same way that their analog predecessors did. And both remain eternally disconnected from our own far superior internal processor, the brain, in exactly the same way.

WJT Mitchell used the Abu Ghraib images to confirm digital’s indexicality and its ability to reveal issues such as social and political reality … way beyond the intention of the snapshot photographer who took the picture. This new set of meanings arose because of how the images were networked and used.

‘Whereas the relation between reality and representation was a key concern of classical photography, now, as photography has become digital, the focus has shifted from this single relation to a multiplicity of relations that extend from a photograph. Value is no longer primarily derived from the special relation between the object in front of the lens and the way it is depicted in the photograph, but it is generated by the multiplicities of image visualizations and variations branching off from the initial moment of capture‘. (Hariman & Lucaites, 2016: 51 – Melanie Bühler. 2015).

My summary of the opening arguments in the book is thus:

MITCHELL, W.J.T. 2005. What do Pictures Want? The Lives and Loves of Images. Chicago: University of Chicago Press.