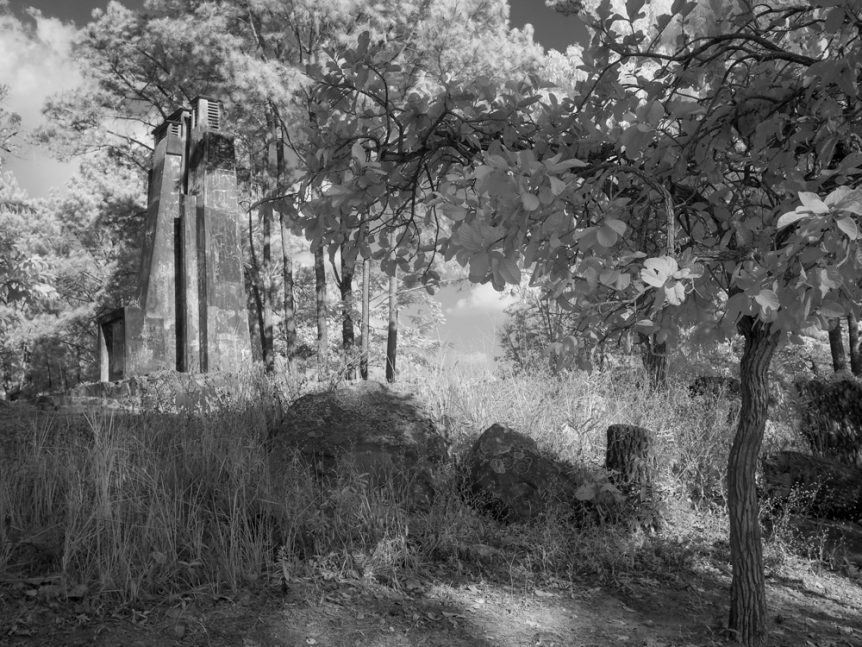 As I write this, I am on Day 3 of a two week Cambodia trip, so most of my thought processes are focused on the work to be done, here.

My reading for the trip includes Setting Sun: Writings by Japanese Photographers. I have always had a fondness for all things Japanese, and when Paul pointed this book out, I had to get it. I will write a more critical post on the book later, but one early quote stood out, and seems appropriate. Ken Domon, in his short essay Photographic Realism and the Salon Picture (1953) noted:

’Realism is not found in the cold, square device we call the camera. The person who shoots, his (sic) view of the world, and his method of expression are what contains Realism’. (Setting Sun, 2006: 26).

As the Cambodian project has unfolded, it has become ever clearer that this is very much a personal artistic (and psychological) journey, rather than just to ‘record what is there’.

One of intentions this trip is to continue to look at the ‘aftermath’ of the Khmer Rouge Genocide in different ways. Last module, this led me to using ‘digital negatives‘, with the intent to ask questions about what happened, challenging the usual audience perceptions about ‘landscape’ images.

This trip, I am experimenting with infrared, learning from Judy Glickman Lauder and others, and seeking the haunting, ghostly yet not (hopefully) artificial and hokey effects that the technology can deliver. I do not want in any way to trivialise history or be disrespectful to anyone – but I do need to challenge my audience to stop and ponder.

The header is from Kirirom, about 3 hours from Phnom Penh in today’s traffic, which we visited on my first day here. King Sihanouk created Cambodia’s first National Park, in the 1950s. His residence there was almost totally destroyed by the Khmer Rouge in the 1970s, except for the chimney, which is what the image portrays. The photograph seems oddly disquieting, almost ethereal, yet somewhat brooding.

I posted the image on Canvas, as part of a Forum Activity, with no explanation. With Julie Dawn Dennis’ permission, here is her comment.

‘There appears to be some kind of modern monument in this image which the camera looks slightly upwards toward, suggesting an importance to it. Alongside the rather stern looking structure are straight trunks of tall trees, their height reaching above the structure, suggesting perhaps a power of nature over man. The ground seems rather overgrown indicating passage of time, but there is a path in the foreground so we know that this place is in use.

The rocks in the foreground create a kind of barrier between the photographer and the monument, and these rocks stand like monuments themselves, reminding me of an ancient stone circle. This is perhaps a place of spiritual significance. From the path and the clean cut stump of a felled tree we know that human presence was not very long ago. In the foreground, a younger tree grows. Nature forms a large part of the image, and almost central is an area free of anything but sky. This image could be intended as an expression of hope perhaps’.

For me, this image is dominated by the building.  It is much higher than the photographer’s position and gives a sense of fear and foreboding.  But nature has taken over representing new hope – particularly the new growth on the tree in the foreground.  The arching of the tree has given the photographer a space for quiet contemplation under its shadow.  This is a glimpse of a much bigger story.

I had to look twice at it, because I see a “ghost dog” in the image, right here in the front at 6 o’ clock, (see attachment) the way the light falls on the grass. A tiny little fella, hunched down looking outwards.

This is IR I presume, and it looks fantastic, seems a little nicer than film IR which is a little too exaggerated for my taste: (to gimmicky) but this looks really nice. From a technical standpoint, nice detail from black in tree to highlights in sky, seems no loss of detail at all. Leaf cluster in foreground tree almost looks like a white flower.

The verticals of man made VS nature very strong. Interesting building, quite scary feel for some reason? If one would happen on it by accident?  Composition leads the eye well from foreground to it.  What is it?  Makes me wonder which is good.

I need to be sure that images contain the right (metaphorical ?) content, but I did find Julie’s comment encouraging, as the aesthetic seems to be prompting some helpful, instinctive responses in keeping with my intentions.

Daido Moriyama wrote, in The Decision to Shoot (1972):

‘There is no way that a single person can have a truly comprehensive view of the world, but it is possible for him (sic) to conceive of an outline of its totality. It is therefore from the gap between his perceptions of cruel reality and his weltanschauug [a particular philosophy or view of life] – in other words, from the interplay between the extremes of the real and the ideal, as they are juxtaposed in his shutter – that meaning arises’. (Setting Sun, 2006: 35).

The search for meaning is central to both the Cambodian project and my related image making.

One of the blessings of this MA has been the Cromarty cohort, who provide encouragement, praise and damning criticism of each others work – in roughly equal measure. Ashley was one of several that commented on the photograph and the project when I shared a quick edit in our WhatsApp group.

‘Is this an aftermath story that is far enough removed from the event that the horror can be treated lightly, almost in passing as you focus on Cambodia today, or are there dark forces still at work to whom the past is closely tied that are getting in the way of the current generations progress and escape from the past’?

Serious food for thought. I believe that for my non-Cambodian audience, I do need to explain the Genocide, as important context to the personal stories. In Cambodia, I need to continue to research and seek local counsel on how best to present this, here. Tomorrow, before I travel, I will be meeting with some Phnom Penh photographers to discuss this and other issues.

Still, I think the infrared technique is giving me encouragement to continue, and I will persevere.

The other main work of the trip is to move forward in the capturing and visualising of personal, unfinished stories of the Genocide, with Sarath and family. Kirirom was a military camp, that Sarath lived in at age 3, until, in 1970 he was moved with his mother, Am Yon, to Phnom Penh, for safety. April, 1975, the Khmer Rouge captured Phnom Penh, completing their takeover of Cambodia, and destroying all safety. Sarath and his mother were sent to Battambang, in the North, where they were separated, and where several of the personal stories are located. And Sarath’s father was executed within days, at Kirirom, where he had stayed.

In Kirirom, we met a son of another military commander of those times, who Sarath will follow up with as there may be more clues as to exactly what happened to his father. We also have been talking again with Am Yon, where yet more insights have surfaced about Sarath’s family. As we plan a book to be published in Cambodia this year – with some of my photographs, history notes and personal stories – all of these new insights and stories are significant.

For example, today we discovered that Sarath’s Mother’s brother in law painted the Ramayana Murals in the Silver Pagoda in Phnom Penh in Royal Palace. And Sarath’s Great Auntie looked after some of King Sihanouk’s Children at the Palace. Sarath didn’t know most of this. We also discovered that Sarath’s Father was a member of a small military contingent sent by Sihanouk to support the Vietnamese at the Battle of Dien Bien Phu, against the French, in 1954. That battle led to Vietnamese independence. Apparently, there are newspaper pictures of Sarath’s Father chained to his machine gun – which was normal at that time – and which we need to track down.

Part of my task is to continue developing my portrait work, looking for more intimacy, and possibly to include in the book or the planned exhibition. 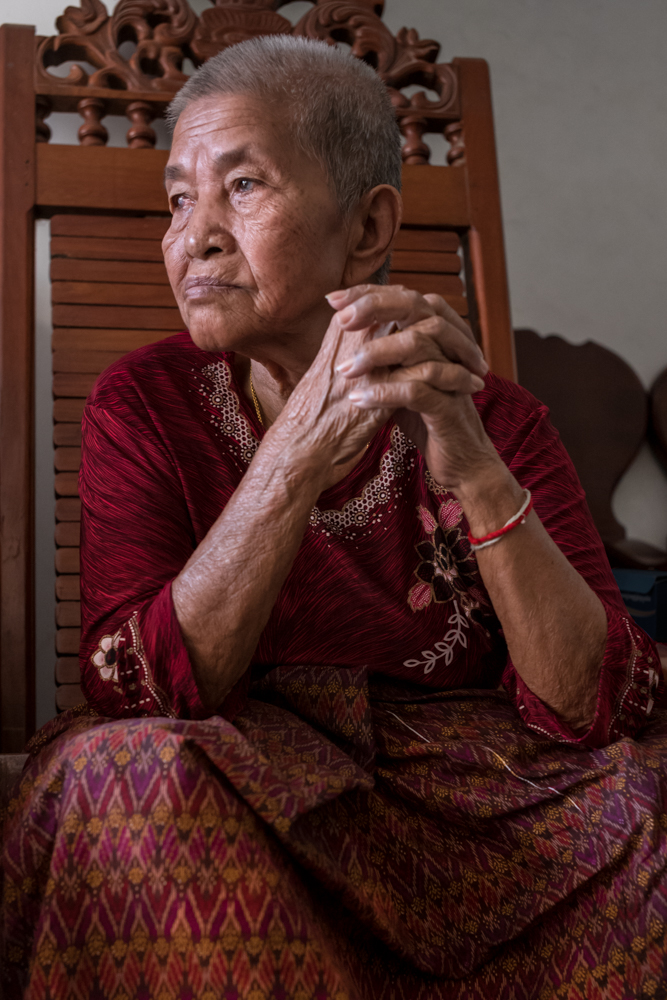 I had quickly shared this on WhatsApp, and Ash made a few comments, which she has agreed that I can share.

This one is perhaps your best portrait ever of all I have seen. This one has aura if there truly is such a thing. 1000 times more revealing than the other you shared.

I feel like I know this woman, that I see her soul. The resoluteness to survive in spite of what she saw and experienced. A sadness and even a bit of anger looking back at what she lost and over what she had to endure. And the clasped hands perhaps a shred of hope. That is more than I have ever read into a portrait.

That portrait moves me. And that almost never happens. I don’t read people particularly well, and I know I have some foreknowledge of her, but this one shouts at me. I don’t know if my connotation is accurate, but it is an extraordinarily powerful photograph.

I am not used to such comments, but if it means I am on a better track with my portraits, then the timing, at the beginning of the trip, is motivational!

Tomorrow I will be in Battambang for a couple of days. Then back to Phnom Penh, to meet book publishers and distributors, and also to investigate venues. At the weekend, I’ll be back in Siem Reap, to meet with education people and also revisit some of our schools.

Oh, and I’ll be taking photographs throughout.