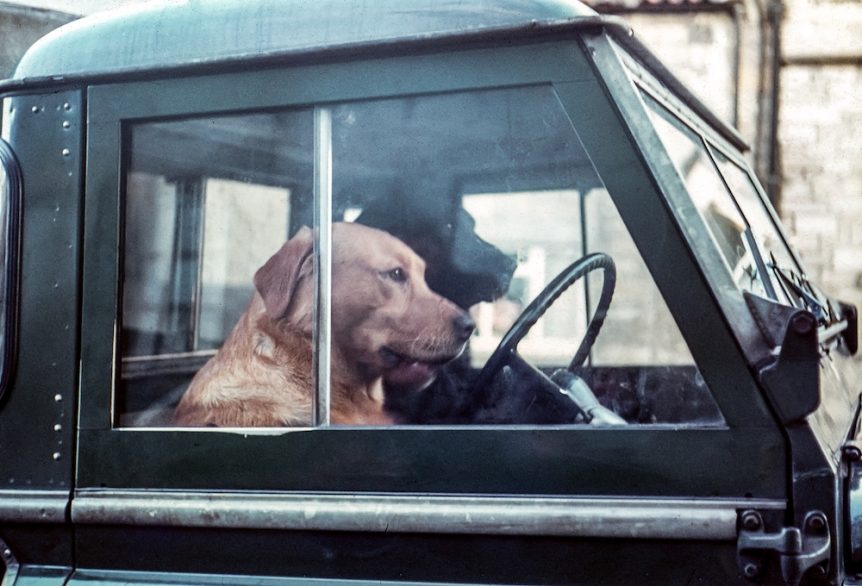 I have an ongoing project to digitise my film archives, which has been a bit interrupted by the MA. So a 2019 resolution is to make more progress on the task.

On New Year’s Day, I posted the image in the header, ‘Drivers‘.

It was taken in October, 1972, at Warkworth, Northumberland, using a Praktica Nova 1B (the first real SLR I owned) and Agfa CT-18, to which I was addicted at the time. It was unposed and I only took one image. CT-18 was a slow 50 ASA film that had a slightly blue cast and required processing by the manufacturer. ‘Drivers’ is un-cropped, and only post-processed to restore the slide material, eliminating marks and restoring colour balance.

In less than twenty four hours on Facebook, ‘Drivers’ became my most liked image of all time on the platform, basically driven by two ’35 mm Film’ groups on the platform whose members seemed to really like the image. Over 650 likes and growing as I write. It is good to see that ‘likes’ are not all about camera technology and technique. This is clearly subject driven.

Yet the image also got deleted from the ‘Street Photography – Vivian Maier Inspired‘ Facebook Group, which has over 70,000 members. This was presumably because the image did not meet the norms of the admin’s views of street photography – though no one had the courtesy to advise me, a separate issue.

This prompts me to ask that chestnut of a question, ‘What is Street Photography’?

I am not here going to deal with the ethics side of things – I have written elsewhere about that. Just because you can take an image, it doesn’t mean that you should without at least thinking about what you are doing. Neither will I deal with ‘good’ composition – that applies to all photography. Rather, I am interested in the ‘norms’ of the street genre.

Perhaps the classic street photograph is this one, illustrating Cartier-Bresson’s ‘Decisive Moment‘ philosophy. 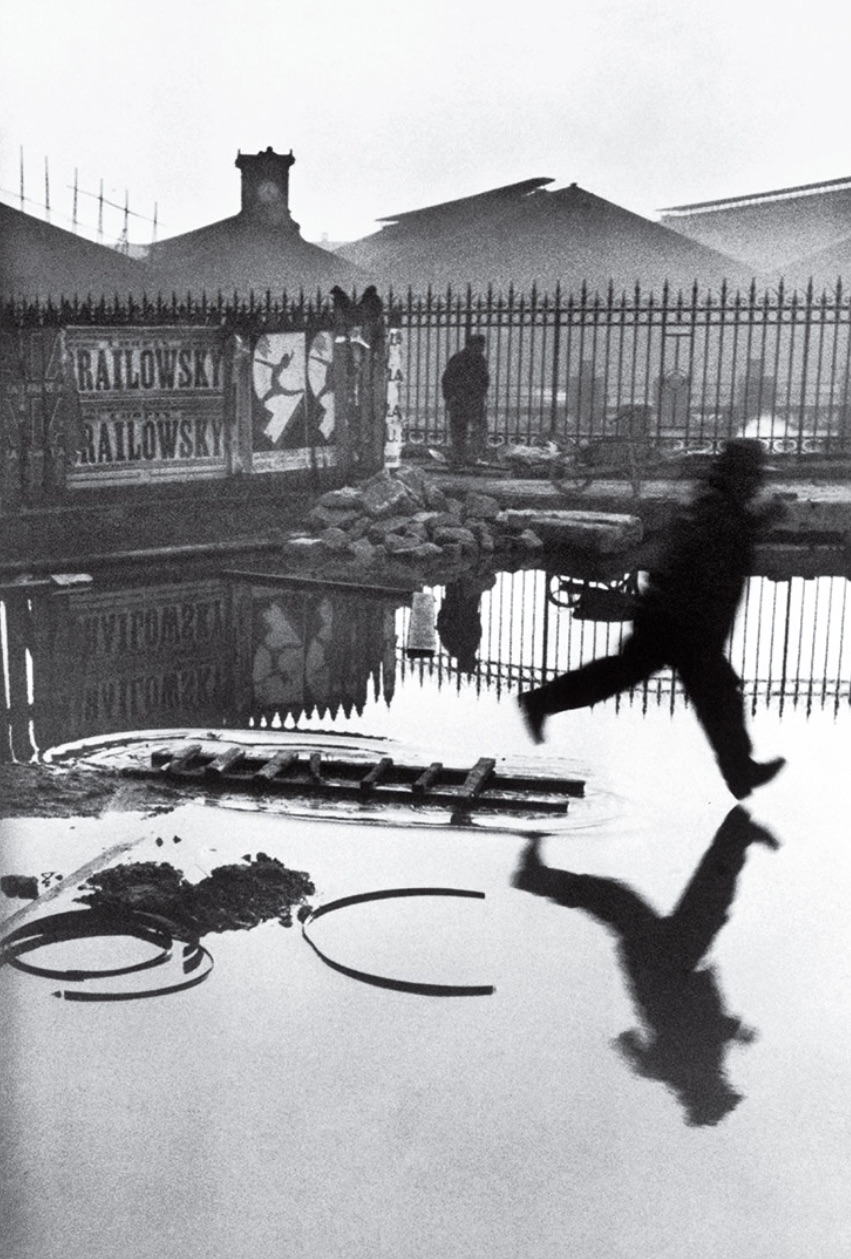 Since before the time of Eugène Atget, there have always been two fundamental schools of street photography – the one-off, perfectly timed composition, and the creation of a series to tell a social story (a la Robert Frank).

In execution, there are then followers and lurkers. Followers wander the city, seeking the image. Alex Webb would be a great example. Lurkers find a spot, for example with great light for a dramatic composition, and wait for something to happen.

Perhaps Alan Schaller is a modern-day example of lurking … to ‘put’ people into exactly the right place in a scene. Schaller founded the SPi (Street Photography International) Collective, which has over 750,000 followers on Instagram. 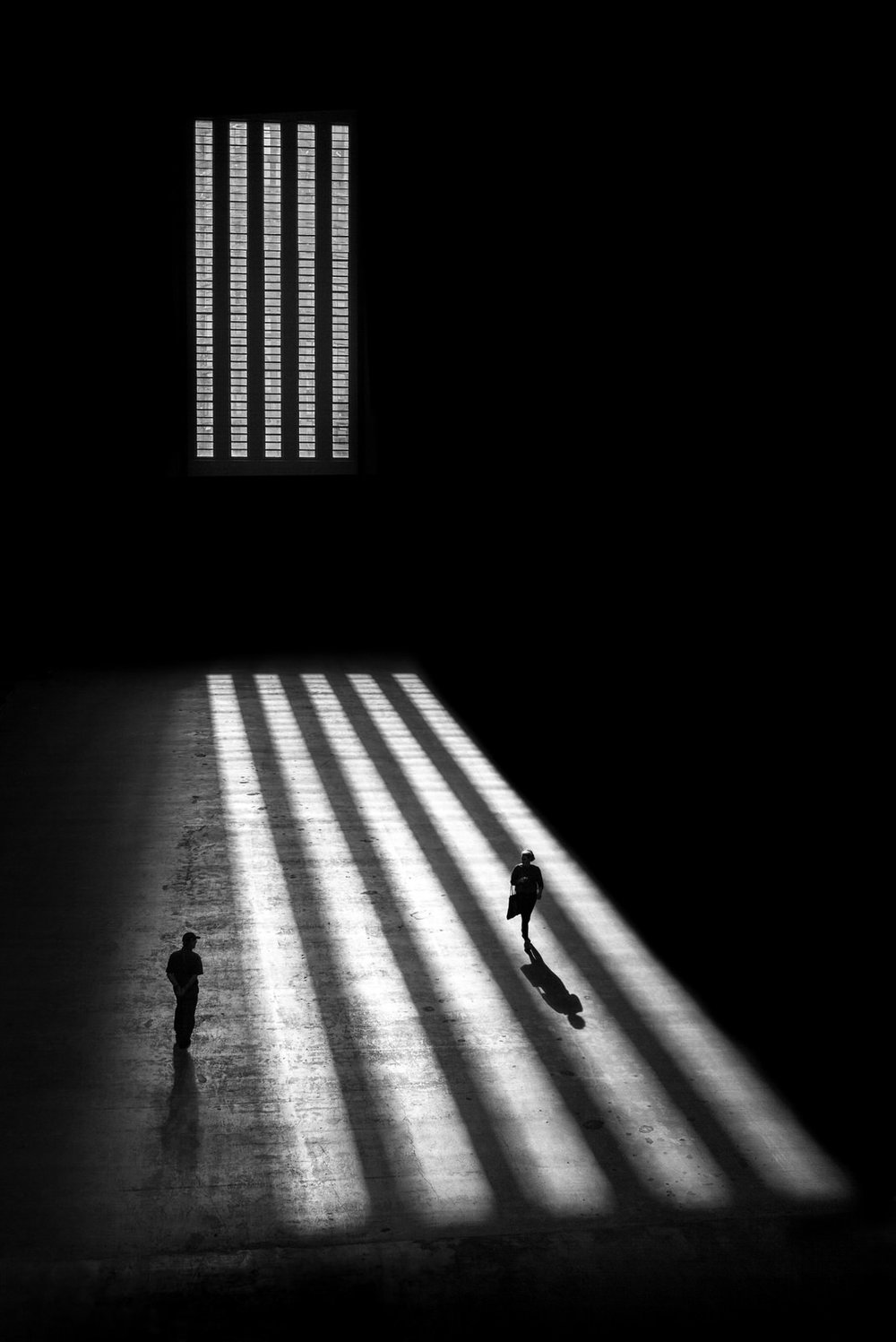 So can we ‘define’ Street Photography in a simple way? From the ‘Vivian Maier’ Facebook group:

‘All images must have human interest – however it can be indirectly through shadows, reflections etc. All images should tell a story and show a relationship between people and their surroundings in order to convey a message. General shots of ‘streets’ for example showing people from behind or in the distance are not recommended. It is not a requirement that photos depict or are taken in the street as long as they are taken in a public place whether it be indoors or outdoors’.

When you move past the formulaic and rules based nature of this statement, probably the most relevant is to ‘ …  show a relationship between people and their surroundings …’.

But there are things missing. Matt Stuart, Magnum Associate, notes:

‘Moments happen, and before you’ve had time to marvel at them, they’re already gone. Anything you try to construct loses the comedy’. (Stuart, 2015).

So serendipity is part of great street photography. Back to Henri Cartier-Bresson.

Robert Frank travelled the towns of America amassing images to tell a story, the condition of American society as he found it. Yet even as he was creating his documentary series, each image was ‘found’ and in that sense, also serendipitous. As I am working on the Cambodia project, there is constant tension to get images which add two the story, yet also capture ones that are engaging and stand alone.

Joel Meyerowitz, often considered the father of colour street photography, was very much influenced by Carter-Bresson and Frank.

In his biography, he wrote:

‘We loved watching the play of light on Fifth Avenue and how it gave meaning to things. We watched the seasons change and with it women’s clothing getting lighter and sexier. We were living and breathing photography … We felt we were part of a movement that was making photography more interesting than it ever was before’. (Meyerowitz, 2018).

There is an excitement and entertainment aspect to street photography. It goes back to the essential triangle of photographer-subject-audience.

Whilst street photographers tend to be solitary individuals, roaming their cities, there is something about the desire to reach and engage an audience with the resulting images. Of course, Vivian Maier is a notable exception to this, in that her work only was ‘found’ after her death.

Interestingly, ‘Vivian Maier: the Colour Work‘ by Colin Westerbeck shows that she did not only shoot candid people pictures as she walked the streets with her camera – graffiti, cityscape, details, plants were all part of her work when walking around the streets .. through in my view not a ‘candid street photograph’. Whatever she found interesting, one assumes. 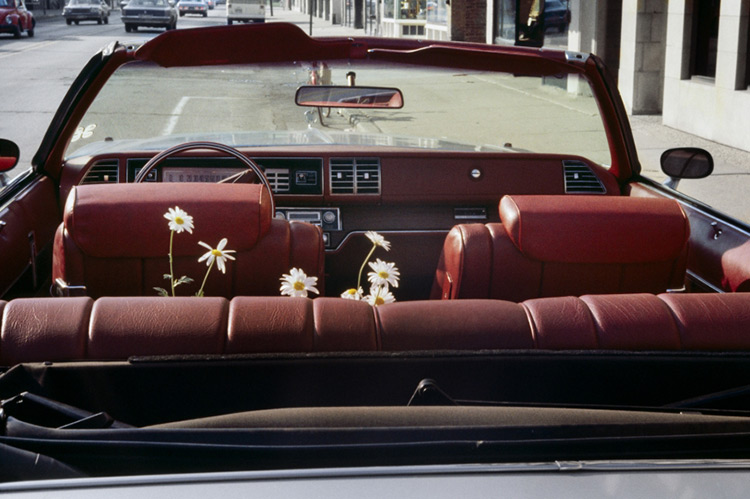 It is no surprise that street is such an all-pervasive genre on social media.

Let us now make a short Japanese detour. ‘Bystander‘, by Westerbeck and Meyerowitz, now in a second enlarged edition, is considered to be the definitive history of street photography. Good though it is, the second edition carries only 4 references to Japan –  fleetingly about Henri Cartier-Bresson’s visit therein the 1950s, and William Klein’s book, Tokyo. There is no mention of Japanese Street Photographers, despite the huge influence that artists such as Daido Moriyama have on the genre – both in Japan and worldwide.

A study of Moriyama’s work, especially the early Provoke work and then the Record series, shows a mix of all kinds of images in his street work, including gritty cityscapes and almost abstract images.

And arguably his most famous image is taken on the streets … of a dog. It was photographed in Misawa, where there was US Air Force base, in the northeast of Japan. 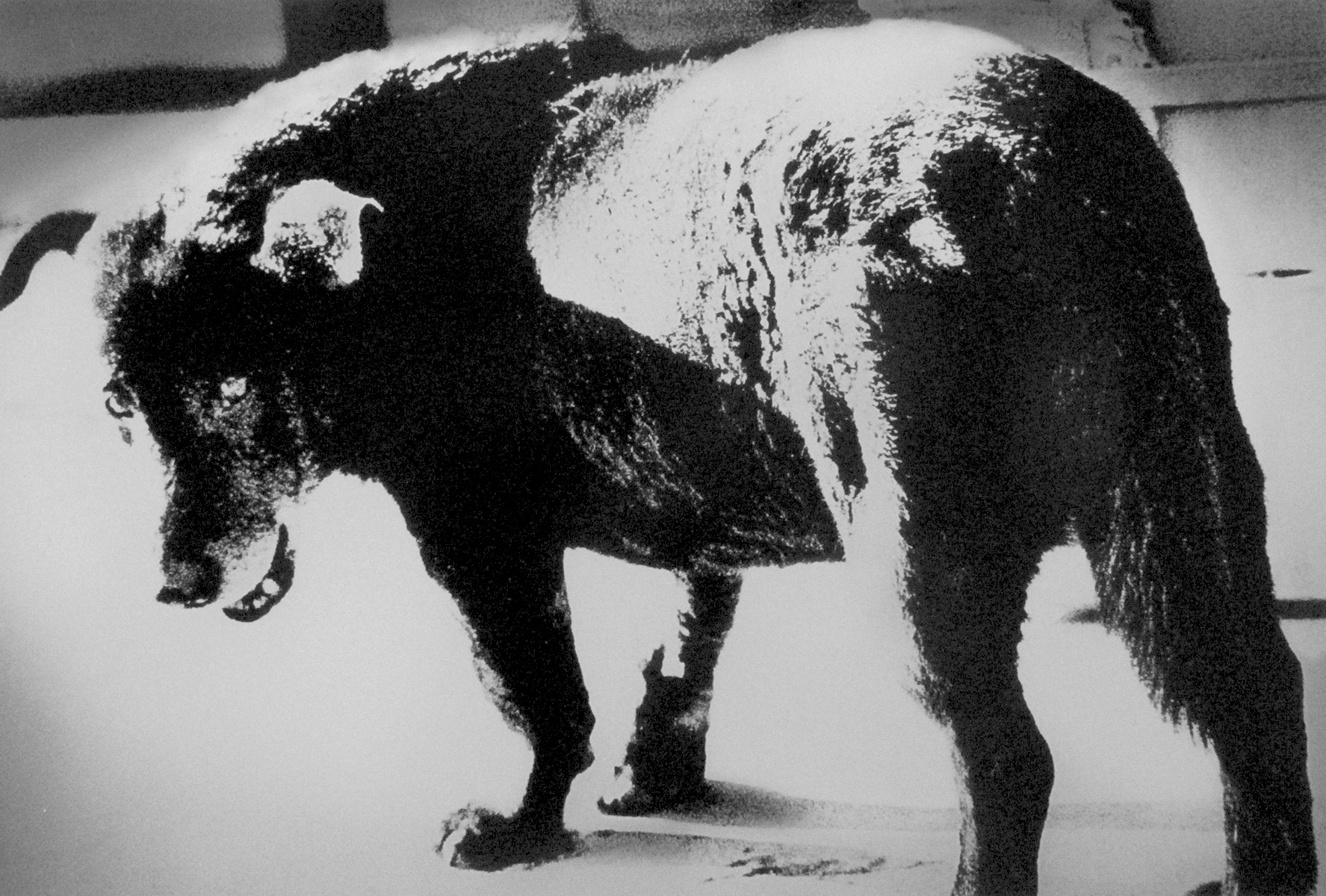 But is this a ‘candid’ street photo? From the essay “Dealing with a stray dog” by Akira Hasegawa comes a first-hand account by Daido Moriyama himself, of how this photo was taken as he stepped out of his hotel. The photograph first appeared as a single image within the series Nanika he no Tabi (En Route to Something) in the March 1971 issue of Asahi Camera.

‘[Moriyama] showed both himself and Japan as a stray dog, roaming for scraps of identity in an uncertain and quickly changing world’.

The Westernised definition  of ‘street photography’ is thus perhaps restrictive, as is our understanding of the real global history of the genre.

So, back to my own ‘Drivers‘ image, with dogs.

Well, at one level it is – it is candid, un-manipulated, serendipitous and fun. It also would not the possible without an understanding of the human relationship with cars, driving and dogs.

It is perhaps a descendant of Eliot Erwitt and his fascination with dogs. 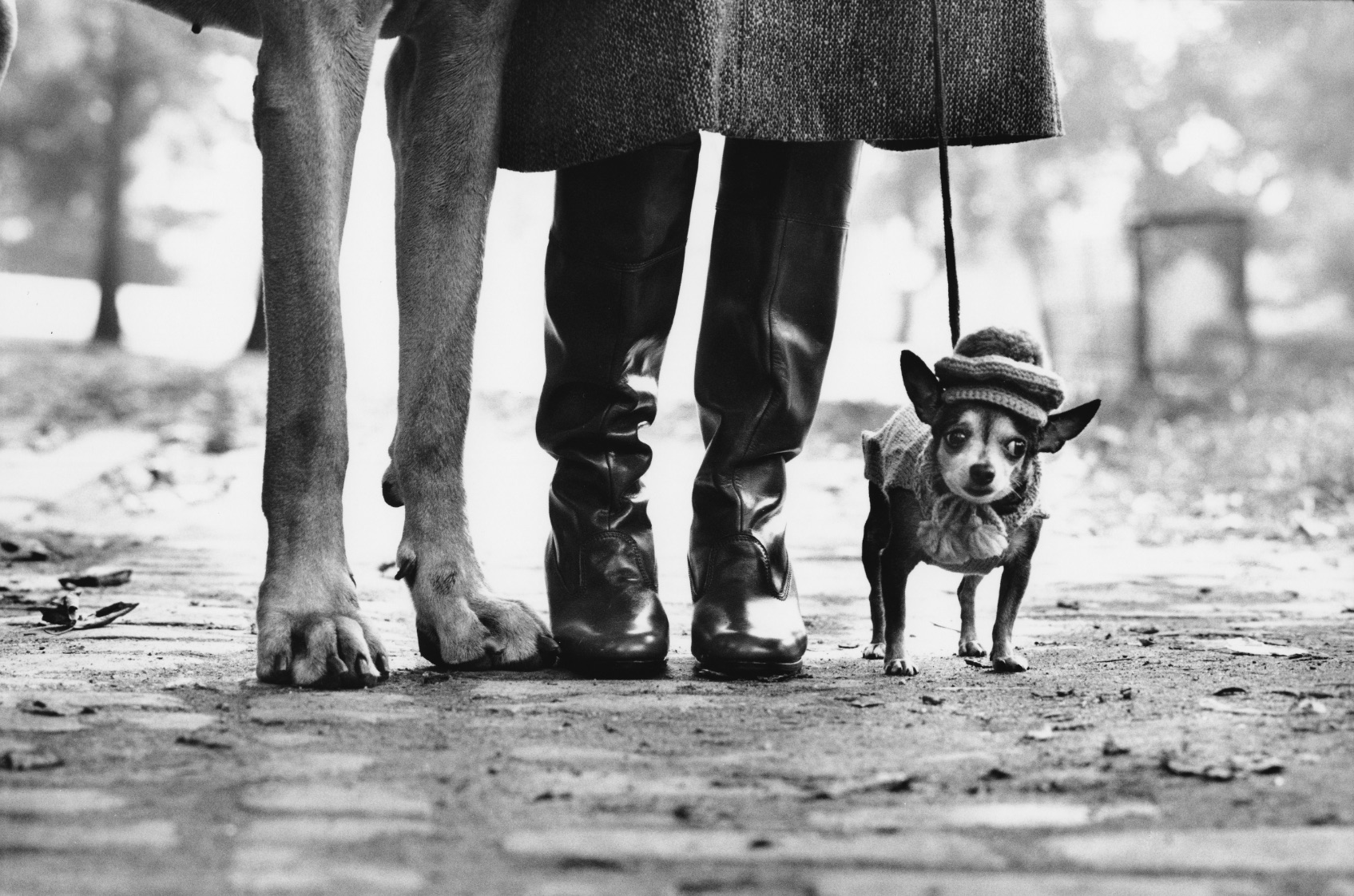 ‘It’s about reacting to what you see, hopefully without preconception. You can find pictures anywhere. It’s simply a matter of noticing things and organizing them. You just have to care about what’s around you and have a concern with humanity and the human comedy’. (Magnum Website).

Is this ‘street’? In the sense that it is in a public place and un-manipulated, yes. Its clearest connection with the genre is that it shows a relationship between the human, the scene and the dogs. There is a story. And, of course it is a fun image that engages the audience.

But is it candid? I cannot establish whether this was posed in any way. I have a suspicion, however, that there was some interaction between Erwitt and the dog owner to get this image right. Just the act of crouching down to take the shot would ensure that.

As to my ‘Drivers‘ photograph, whilst it has so many qualities of street – and indeed is a photograph with an engaging story – there is no human being explicit in the scene, even partially.

Maybe the ‘Street Photography Vivian Maier Inspired’ Facebook Group was right to delete it on that ground – at least from an (arguably narrow-minded) Euro/US centric viewpoint.

The vagaries of social media 🙂

MEYEROWITZ, Joel. 2018. Where I find Myself: A Lifetime Retrospective. London: Laurence King.