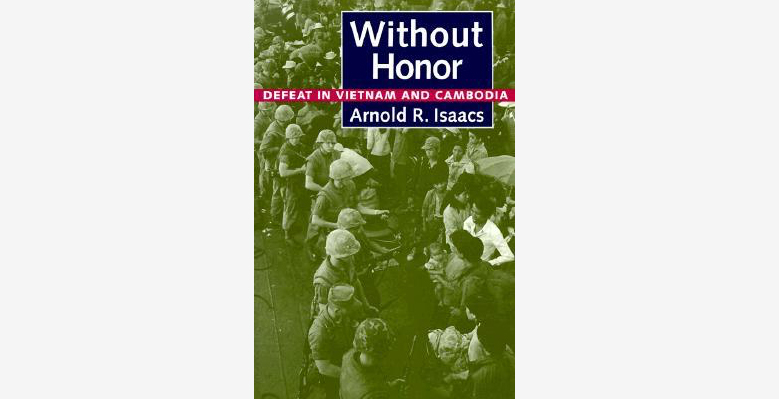 The U.S. intervention [in Cambodia] was a military, political strategic, and moral catastrophe for which only Richard Nixon and Henry Kissinger, not the acts of past administrations, could be held responsible

Arnold R. Isaacs was a journalist working in South East Asia at the time of the Vietnam War. His book Without Honor: Defeat in Vietnam and Cambodia is both a  personal account and meticulously researched, and a  reference work on the US involvement in that area. For anyone that has studied those moments of history, it is also an indictment of Nixon and Kissinger’s actions.

As Isaacs notes, Nixon inherited the Vietnam War, and it is likely that any other US administration would have taken similar decisions in an effort to extricate themselves from that situation, whilst ‘saving face’. But what Nixon and Kissinger instigated in Cambodia falls solely on their shoulders. This included the illegal bombing of Cambodia in an attempt to disrupt Vietnamese Communist supply lines.

More ordnance was dropped on Cambodia in three years than all the bombs dropped by the allies in all theatres of war in World War II. No one knows how many people died, but one thing is certain – the bombing encouraged support for the Khmer Rouge Communists against the corrupt (and US supported) Lon Nol regime of the Khmer Republic (1970-1975).

‘There is one great exception to that judgment, however, and that concerns Cambodia The decision to make war there, unlike most others in Nixon’s first term, was avoidable. It did not follow from choices made in the past. It offered significant but temporary tactical advantages at the price – which Nixon and Kissinger refused to see – of attaching the United States to a disastrously unprepared client, at a time when the public mood at home would not tolerate any new entanglements.

Cambodia complicated all the political and diplomatic problems of the war; it forced the U.S. from 1970 on to try to find a way out of not one conflict but two, which soon put diverging demands on American policy. Ultimately Cambodia was also an important factor in the breakdown of the Paris accords The U.S. intervention there was a military, political strategic, and moral catastrophe for which only Richard Nixon and Henry Kissinger, not the acts of past administrations, could be held responsible’. (1983: 504)

It is my intention to be sure that my audience knows this history. Many other errors were made, and both the Sihanouk and Lon Nol regimes must also bear responsibility for their actions which not only failed to stop the rise of the Khmer Rouge but in many ways exacerbated their rise.

Nevertheless, the US involvement was critical. It will be covered in both the timeline of the book as well as the introduction to the BRLSI installation. I have just updated the timeline, and these events are pertinent:

1965 – Sihanouk breaks off relations with the US over the Vietnam War. He allows North Vietnamese guerrillas to set up supply bases in the country.

1967 – As part of Sihanouk’s attempt to re-normalise US relations, Jacqueline Kennedy visits Cambodia on a personal trip.

1969 – US begins secret bombing on Cambodian soil against North Vietnamese.

1969 – Sihanouk re-establishes diplomatic relations with US; orders attacks on Vietnamese Communists in the country.

1970 – US continue bombing in support of South Vietnamese operations in Cambodia; US forces enter the country to disrupt Vietnamese bases.

1970 – May 4th, Kent State Shootings during protest against US bombing.

1970 – Congress stops combat forces and advisors in Laos and Cambodia.

1971 – By year end, about 30% of the Cambodian population has been displaced.

1973 – Paris Peace Agreement for Vietnam cease-fire; does not include Cambodia.

1973 – US resumes bombing in Cambodia; ended by Congress in August.

1973 – Sihanouk says he will negotiate with the US but various attempts from all sides fail.

1975 – US airlift of supplies into besieged Phnom Penh.

1976 – Khieu Samphan is Head of State; the country is re-named Democratic Kampuchea.

1977 – Fighting breaks out with Vietnam.

1977 – Pol Pot emerges as ‘Brother Number One’ and aligns openly with China.

I am re-printing a contemporary review of Isaac’s book in full, here, as it does an excellent job of summarising.

‘In Vietnam, Reagan has felt compelled to insist, ‘ours was, in truth, a noble cause’. Isaacs, who covered the war for the Baltimore Sun, sees it differently. His time span is relatively brief (compared with Karnow’s, below): the Vietnamese situation in 1972; the Paris accords of January 1973; the ensuing period of American withdrawal – climaxed by the fall of Saigon in 1975. (Separate chapters deal with Cambodia and Laos, the ‘pawns’ of the Vietnam War).

Overall, his conclusion is not unusual – though it reverses some ‘revisionist’ attempts to show that a national lack-of-will brought defeat in Vietnam. Instead, Isaacs argues, the defeat and the ensuing havoc resulted from: America’s failure to understand its enemy and allies, lndochinese history and culture; a mistaken belief in the power of sheer military force; and political and bureaucratic barriers to the reversal of failed policies.

For Isaacs, Kissinger’s repeated reference to North Vietnamese negotiators as ‘insolent’ neatly sums up what was wrong with the American perspective on Vietnam.

But Kissinger and Nixon are the particular villains here on only one score: the destruction of Cambodia, and the human devastation subsequently wreaked by the Khmer Rouge. [my emphasis]

Otherwise, says Isaacs, any administration would have taken a similar approach: Nixon and Kissinger were confronted with a failure, and if they blamed the protesters, shut out opposing views, sought to punish their victorious foes, and refused to take the North Vietnamese at their word, then they only acted out ingrained Washington attitudes in a heightened form. Isaacs’ fine, vivid detail complements the broad strokes of his interpretation‘.