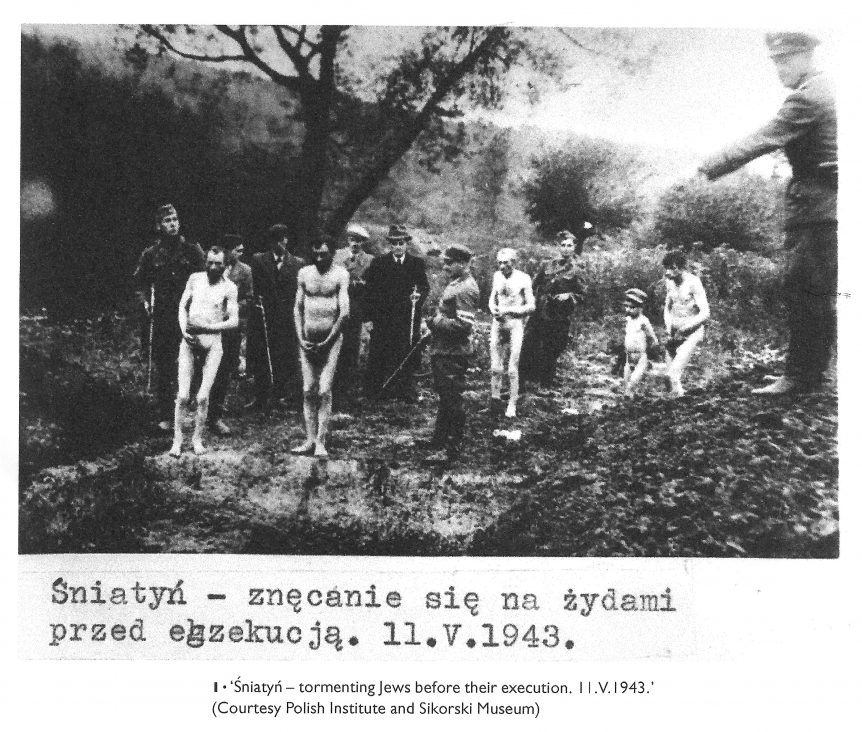 I have just finished Janina Struk’s Photographing The Holocaust. Michelle Caswell’s Archiving the Unspeakable was ‘book of the year’ for me last year, Struk’s might get that prize in 2019.

This is not a full review – just notes for future reference.

Struk narrates the role of photography in the Holocaust, starting with the transition from the Weimar republic to the Nazi regime, and the associated use of propaganda imagery and film. She goes on to trace the role of atrocity photography on all sides during World War II, and how it was dealt with at Liberation. Not stopping there, Struk’s research deals with the transition to the Cold War, and the way that Holocaust imagery was used politically, on both sides, as well as Israel’s need to see the Jews that died as martyrs and not as victims.

Critically, Struk suggests that the provenance of the images was always of secondary importance to their political use. The book is one of the best researched I have read for some time, and Struk goes to enormous lengths to track down where photographs were taken, and, if possible, who took them.

Struk starts at the beginning, with the excellent question, what is ‘documentary’?

‘In 1926 Scottish film-maker John Grierson coined the term ‘documentary’. The destabilized economies of the USA and Europe, following the Wall Street crash, had prompted artists and photographers to look for a visual language to convey the social consequences of economic hardship. Author and critic John Tagg [in the Burden of Representation] argues that documentary was not only ‘a complex strategic response’ to this economic and social crisis, but also to a crisis ‘of representation itself ‘. (Struk, 2004: 18)

It transformed the earlier scientific photography from what Tagg describes as ‘the flat rhetoric of evidence’, into ‘an emotionalised drama of experience’. The scientific approach was no longer sufficient. This emotive element, Tagg argues, helped to seal the relationship between the photographer and the photographed, the viewer and the viewed‘. (2004: 18).

I find this a most useful definition of documentary, put into its Western perspective. Struk also notes that Walter Benjamin wrote that mechanisation and the freeing of images from dependence on ritual meant the politicisation of photographs, on left and right. He was right. (2004: 18).

The Nazis used photography and cinema after they took power, as propaganda on the ‘strength’ of Germany under their control. It was not just the set-piece events and ‘theatre’, but also domestic life in Nazi Germany. Struk noted:

‘German families were encouraged to reflect on their racial superiority through family photographs and albums … amateur photography magazines published ‘tips’ on how to produce ‘racially impeccable’ photo albums‘. (2004: 23-24).

This followed the British use of rather unbelievable propaganda post World War I, which somewhat ironically made the the British Government reticent to believe the imagery of Nazi atrocities coming from the Soviets – considering it overblown and misleading. The US reacted badly to those earlier British efforts, and in turn were also reticent to trust Soviet news reports.

It would seem that there is no ‘right’ amount of propaganda on any side, and it was into this mix that images from World War II were used. All sides wanting to talk up their success, and talk down their enemies. But with scant notice paid to news of the death camps.

Struk retells the story of Susan Sontag’s first exposure to atrocity images, as a child – which no doubt heavily influenced her views that such imagery should not be shown widely, as detailed in Regarding the Pain of Others.

‘In July 1945, Susan Sontag, as a young girl, saw photographs of Bergen-Belsen and Dachau in a bookstore in Santa Monica, and found it hard to make sense of them. She later wrote: ‘Nothing I have seen – in photographs or in real life – ever cut me as deeply, instantaneously. Indeed, it seems plausible to me to divide my life into two parts, before I saw those photographs (I was twelve) and after, though it was several years before I understood fully what they were about’. (2004: 132).

Sontag has written that photographs of horror do not necessarily ‘strengthen conscience and the ability to be compassionate. It can also corrupt them. Once one has seen such images, one has started down the road of seeing more – and more.

‘Images transfix. Images anesthetize’ Sontag felt that after seeing these images, ‘some limit had been reached’. Not only did she feel ‘grieved and ‘wounded’ but, she said, ‘something went dead‘. (2004: 132).

‘One eyewitness to the camps, British MP Mavis Tate, also wondered what could be achieved by looking atrocity photographs. ‘They are infinitely less terrible than the reality we saw,’ she said, ‘because you can photograph results of suffering, but never suffering itself’’. (2004: 132)

Struk discusses the ways that various aspects of the Holocaust were memorialised in photography – from the personal and emotive, to the technical and forensic.

‘In comparison to the emotive images of human suffering which would be used to represent the camps liberated by the Western allies, those which were released to represent Majdanek showed the industrial scale of the camp –  Zyklon B cylinders, the interior of ‘gas cells’, the interior of barracks ‘showing remnants of rope used to hang victims’ and the exterior of the ‘torture chamber’, piles of shoes and boots, ashes of human remains in the crematoria and a pile of identity cards – the land of detailed photographic evidence that police photographers might take in the course of a criminal investigation’. (2004: 142).

And this impacted the photographers:

Time and Life correspondent Richard Lauterbach, one of the few foreign correspondents to have visited Majdanek, wrote that he was largely unaffected by seeing the gas-chambers, the open graves, the fertilizer made from human ashes and the crematoria. ‘Too machinelike ‘, he reported. ‘The full emotional shock’, he wrote, came when he saw a warehouse full of people ‘s shoes – 8oo,ooo pairs of them. ‘There’s something about an old shoe, as personal as a snapshot or a letter.’ (2004: 142).

‘Barbie Zelizer, in her authoritative study of the liberations of the camps, Remembering to Forget, interprets this lack of images of human suffering at Majdanek as a ‘relative absence of vivid documentation’ which provided, she writes, ‘less evidence’ than was required to dispel disbelief. She argues that the was represented was merely ‘a dress rehearsal for the way in which Majdanek western press’s entry into the camps, where scenes of massive decay and death could be photographed more easily’. It was only with the images of western camps, Zelizer argues, that ‘the scope and magnitude’ of Nazi atrocities would be realized.’ (2004: 142).

‘It was to be decades before images of Auschwitz-Birkenau would become familiar in the West, and the tragedy which had taken place at the camps in Poland fully acknowledged. The films, Chronicle of the Liberation of Auschwitz and Madjanek, Cemetery of Europe, remained unseen in the West for the best part of fifty years.

Although in the 199os Auschwitz would become the universal symbol for the Holocaust, in 1945,  for the majority of the British and American public, the true nature of the Final Solution, the concentration camps and extermination camps in Poland, the ghettos and the slaughter in the Soviet Union, were little known or understood’. (2004: 149).

Even the images of the camps liberated by the Western Allies would disappear and fade from public memory. Tony Kushner argues that the very nature of the atrocity photographs and films in a 1945 assisted that process. Although the images had ‘made an impression’, the atrocity materials, he wrote, ‘were such that many wished to put them out of mind as quickly as possible‘. (2004: 149).

‘In the Soviet Union and Eastern Europe the story was different. The millions mof war dead were remembered and honoured. Photographs of the camps liberated by the Red Army, and of Nazi atrocities in general served as a reminder of the horrors of fascism and were firmly fixed in the public consciousness. The changes in the way in which the extermination of 6 million Jews – the Holocaust was remembered , were to be determined by changing world politics’. (2004: 149).

Maurice Halbwachs argued that ‘memory is accomplished not in one’s own grey matter but via a shared consciousness that molds it to the agendas of those invoking it in the present’. (1998: 3)

And from Vicki Goldberg:

‘There are two levels of belief in a news photograph. One is a confidence that what is depicted was not staged but actually occurred and that the depiction was not tampered with … The second level of belief is acceptance of the interpretation the culture places on the photograph, the meaning that adheres to an image within a particular society at a particular time’. (Goldberg, 1991: 8)

‘The image’s triumph in documenting Nazi atrocity went straight to the heart of collective memory …’. (Zelizer, 1998: 141).

May 1945, 84% of US public still called atrocity reports exaggerated.

Yet .. ‘Questions persisted as to whether or not the image was capable of sustaining the news it was expected to bear’. (1998: 143).

‘Scepticism was still associated in part with lingering anti-Semitism’. (1998: 145)

And accusations of fakery ..

‘Many members of the press made it clear that experiencing the camps constituted a professional badge of honour that needed to be shared’. (1998: 150)

By 1979 Jimmy Carter talked about the 11 million victims and not the 6 million Jews. Some scholars said this diminished the Holocaust.

‘In most cases, then, Nazi atrocity more or less disappeared from the US and British public imagination for approximately 3 decades’. (1998: 168)

‘In the first memory wave, photography offered a ground against which to position the experience of Nazi brutality’. In the second wave, the atrocities became almost nonexistent’. (1998: 169)

In the third wave ..

‘… memory work became primary, and photography – as one of its figures – became the figure rather than the ground of Holocaust representation’. (1998: 170)

Amongst other things, images from Vietnam (in the early 70s) of suffering of civilians (Nick Ut) gave renewed life to Holocaust photos and other memory practices, including understanding of Jewish Nationality.

‘In other words, by broadening the detailed accounts of the camps into the more wide-ranging Holocaust story, people were now able to attend to the issue of Nazi brutality without a full understanding of how or why the atrocities happened’ (1998: 174).

Enhancing Memory/ Appropriation of an image.

Atrocity, the ‘as if’ rather than the ‘as is’. Implied versus seen in real time – maybe even more important to memory? Mug shots.